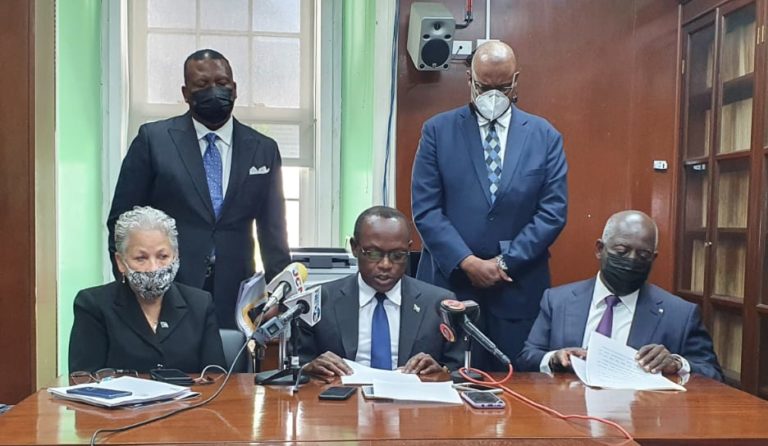 Members of the opposition Progressive Liberal Party(PLP) hold a press briefing in the Minority Room of the House of Assembly on Wednesday, February 24, 2021.

During the budget statement in Parliament, Prime Minister Dr Hubert Minnis assured that despite the twin economic catastrophes of Hurricane Dorian and the COVID-19 pandemic, the Bahamian dollar remains “as strong as it has ever been”.

However, PLP Deputy Leader and Shadow Minister of Finance Chester Cooper warned that Bahamians should brace themselves for an unprecedented period of economic calamity and stagnation under this administration.

“We are deeply concerned about the double-edged sword of increased borrowing and dwindling revenues as certain sectors of our economy remain closed,” Cooper said.

“The minister of finance spoke shamelessly of reserves being up, without acknowledging that it is a result of borrowing in foreign currency at ridiculously high rates. It’s like borrowing to pay the rent and then bragging that it is paid.

“What was presented today was a bleak picture that only compounds our concern after a six-month snapshot and the condemnation found in the last IMF (International Monetary Fund) Article IV statement.”

According to that IMF statement, released in January, public debt is expected to jump to almost 90 percent of GDP by 2021 and to remain more than 22 percentage points above its pre-pandemic level over the medium-term.

The IMF added it is “appropriate” for the government of The Bahamas to postpone the achievement of the public debt target of 50 percent of GDP by another two years.

The budget statement presented by Minnis today, which covers the six months ending December 30, 2020, noted the government’s net borrowing increased by $1.2 billion, indicating the government’s debt-to-GDP ratio was estimated at 78.8 percent as of December 31, 2020.

But Minnis also highlighted government expenditure has increased due to the dual crises being faced by the nation.

Both FNM and PLP always playing the blame game, we are sick of it. It’s already hard dealing with Covid 19. They should be collaborating on fixing this country they sold out and broken a long time ago. I don’t really see where Bahamians benefitted from anything on a long term. The government don’t believe in its own people.