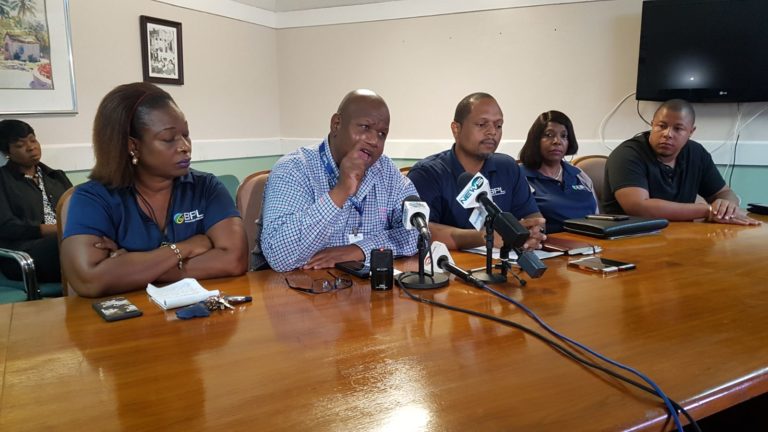 Twenty-four hours after the board of directors at Bahamas Power and Light (BPL) announced a massive restructuring effort to take place within the next 18 months, leaders of the managerial and line staff unions at the electrical company hosted a news conference of their own to ear grievances with the current state of relations between BPL and union executives.

It appears as though the management and line staff unions at BPL and the company’s board at odds when it comes to a laundry list of issues.

The first matter of contention was an announcement made by BPL directors on Thursday, which indicated that the company would layoff 233 workers over the next year and a half.

By mid-afternoon Friday, that announcement was quashed and directors sought to clarify that there would be no layoffs.

The company confirmed that they would be offering voluntary separation packages (VSP) instead.

Thursday’s announcement, albeit a blunder, came as a shock to the union executives.

“They stated in their news conference with the media Thursday that they spoke with company stakeholders before arriving at their decision, but they definitely did not speak with any of us in detail about what their plans are,” Christie said.

“We are always made aware in the media after the fact. Both unions feel that this is not the way to conduct business.”

Another issue of contention for both the BEMU and the Bahamas Electrical Workers Union (BEWU), is that Desmond Bannister Minister of Works, has “seemingly turned a blind eye to their situation,” he said.

“BPL should have discussions with the unions before doing anything and anything that happens in the corporation should be brought to us because we are the ones who represent the stakeholders in BPL.”

Union members are also concerned about the amount of foreign talent that the new board of directors has been hiring.

“Shell say they coming in, the union is not going to entertain Shell bringing in foreigners to run a power plant that our people can do. That ain’t gonna happen and they need to get it out of their minds. They need to come and sit down with the unions because we don’t wanna hear them running on about the unions are irresponsible.”

To that end, both union presidents suggest that BPL asses its current manpower and train Bahamian workers within the company to fulfill the requirements needed for the power plant.

“When Power Secure was here, they never brought in anyone from the outside. They assessed manpower on staff and created new positions for staff we already had, using the resources we already had,” Christie noted.

Both unions are also angered at the company’s lackadaisical approach to upgrading the electrical boards at the power plant.

BEWU and BEMU executives said suggestions which have been presented to BPL directors concerning how the company can mitigate system errors and island wide blackouts, has fallen on deaf ears.

Friday’s back and forth, between union leaders and BPL directors, came on the heels of an hours long blackout which blanketed New Providence. In the end, a system failure was reportedly to blame for the interruption in service.

“That board that blew Thursday has not been maintained for 10 years because they talking about paying overtime. All the boards on this island need to be maintained and the only way that will happen is if they bite the bullet, pay the overtime and allow us to do it in the middle of the night,” said Maynard.

“Every single issue that we have, can be resolved if they just say with us and had civil dialogue.”