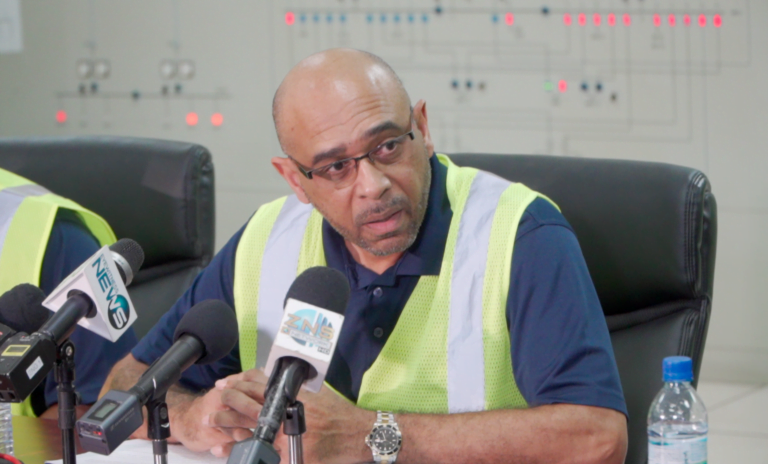 NASSAU, BAHAMAS — Following months of load-shedding in New Providence, Bahamas Power and Light (BPL) CEO Whitney Heastie revealed yesterday that the power company has been teetering on “the edge, of the cliff” with a 40-megawatt generation shortfall and no expectation of load shedding desisting until fall.

“We cannot guarantee load shedding will not take place; because we are on the edge. We are on the cliff,” Heastie told the media during a highly-anticipated press conference at BPL’s Clifton Pier Power Station.

He continued, “As we get deeper into the fall the demand will drop-off, and so will the need for load shedding.”

Seeking to provide a detailed explanation as to what has led to the shoddy power supply of late, much to the frustration of residential and commercial consumers, Heastie pointed out that aging equipment — in some cases 60 years old — is a major contributing factor to the company’s power generation issues at current.

“While our existing generating fleet has been in decay, the load in New Providence has consistently grown with many new megacomplexes,” Heastie said.

“We had hoped that with the additional generation units from Aggreko; we would be in a better position to prevent load shedding for the summer.

“While we were cognizant of the tightrope we were walking due to the level of pressure being placed on the remaining plant, we did not anticipate this level of system failure.”

BPL requires 250-megawatts to supply power to New Providence, according to Heastie.

However, the power company has been generating 210-megawatts, a 40-megwatt shortfall.

“Our 40-megawatt shortfall of what is required is what has led to the load shedding that we are currently experiencing.

“We are working feverishly on returning two generators at our Blue Hills Power Station that will make up [for] this shortfall.

“However, we cannot guarantee that other units will not fail and return us to load shedding as we have no excess capacity.”

The project is expected to cost a reported $95 million.

Some have questioned why BPL’s board moved forward with the project instead of pumping the funds into equipment maintenance.

While Heastie noted that old equipment is a large part of the power generation challenges, he ndicated that even if the $95 million were used for maintenance “it still would not have been able to save us from the current situation that we are in today”.

BPL Chairman Dr. Donovan Moxey also insisted that the engines will not be a dead investment for BPL.

He noted that once online, the new engines will not only assist with enhanced power generation, but will also be tied into the Shell North America power generation plant.

“The completion of the 132-megawatt power plant at station A before the end of this year is the first phase of our generation turnaround strategy,” he said.

“This station is intended to be incorporated into the power generation facilities that will be built and operated by Shell North America.

“The completion of a second gas-to-power plant by Shell North America will mark the completion of the second phase of our generation turnaround strategy, which will see another 90-plus, megawatts of high efficiency, low emission generators pumping power into the grid by mid-2021.”

Moxey added, “Phase three of the phased plan is the completion of the terminal facility for LNG regasification, which is expected to be fully operational by December 2021.”

BPL consumers continue to express their frustration with the power outages, taking to Facebook and other social media platform to blast the power company.

Some have bemoaned high electricity bills despite the outages and demanded that BPL provide some form of compensation.

When asked about compensation for consumers, BPL officials said the company only bills for power consumed.

“We bill only what we sell,” he said.

“That means if the meter is not turning… we do not bill as consumers pay per use.”