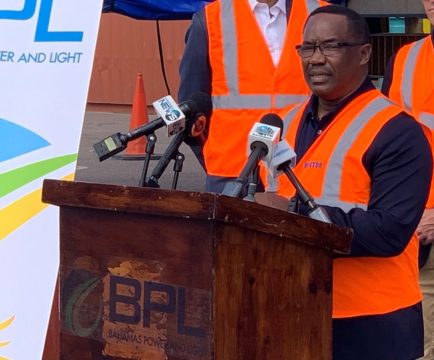 Moxey: The “short order fix” for load shedding is expected this week

NASSAU, BAHAMAS – Bahamas Power and Light (BPL) Chairman Donovan Moxey yesterday apologized to residents across New Providence for what he said was the “unacceptable power conditions” experienced over the weekend.

The chairman acknowledged the “gross inconvenience” associated with the widespread and prolonged power outages, the result of load shedding that was exacerbated due to two generators failing at the Blue Hills Power Station.

“We acknowledge that it is our responsibility first and foremost to keep the power on, and we did not do that,” Moxey said during a press conference at BPL’s headquarters.

“For this, we again apologize.

“Secondly, BPL employees worked ceaselessly all weekend, performing under less than ideal conditions while they worked to restore power, and we want to thank them for their stellar service.

“Thirdly, we recognize our duty to our stakeholders to communicate forthrightly and in a timely manner about those things which impinge on our ability to meet our mandate to supply power to our customers, and it is in that spirit that we are here this morning.

Bahamians, who suffered in the sweltering heat over the weekend due to excessive power cuts that plagued many areas of the capital, will have to wait until Wednesday for the “short order fix”, according to Moxey.

“Let us be clear; what occurred over the weekend was an anomaly. While our company admittedly has a history of difficulty dealing with the summer months, the experience of the past weekend was out of the ordinary, and we are here to explain how and why.The short order fix is expected to be by the end of this week,” Moxey said.

“These rental generation assets will relieve the pressure on our system immediately, and together with machines that are being repaired and brought back into service, will give us some breathing room as far as the load is concerned,” Moxey said.

According to Moxey, BPL employees worked without ceasing all weekend, performing under less than ideal conditions, to restore power.

Yesterday, he said that he wanted to thank BPL employees for their stellar service.

Back in April of this year, Moxey declared that there would be no load shedding this summer.

However, it’s now been less than three months following this announcement and Moxey on Monday defended these words.

“We don’t ever go into a year of planning saying that we are going to have load shedding, because our hope is positive,” Moxey explained.  “What we did in the beginning of this year was look at our maintenance schedule and we did the best we could, given the assets available.

Moxey also explained that providing a schedule for consumers to prepare for power outages as a result of load shedding presents a safety hazard.

“We understand the situation is difficult, and we are going to have a talk with the police today on that but again, we have to balance that with the safety of our customers,” he said.

Over the weekend consumers also complained via social media that some of their appliances were ruined as a result of the excessive power cuts.

Yesterday, Moxey explained how consumers could seek assistance from BPL.

“The process itself involves a claim form and one of the requirements is to have an appliance repair technician look at the equipment to show what happened to the device and to indicate if it can be repaired or not,” Moxey said.

Meanwhile Moxey said load shedding will most likely continue until the seven new engines provided by Wartsila have been installed at the new power station at Clifton Pier.

BPL anticipates that the new power plant will be up and running by the Fall 2019.  However, the completion of the Shell power station, which will incorporate the use of Liquefied Natural Gas (LNG), is not expected until 2021.

“The possibility of load shedding remains until we have completed the new 132-megawatt power plant under construction at Station A at our Clifton pier power station,” Moxey said,

Meanwhile,  seven new multi-fuel engines for Bahamas Power and Light (BPL) arrived in the capital last month from Finland, each being transported at certain intervals from Arawak Cay Port to Clifton Pier.

The new engines are expected to remove dependence on rental generators and place BPL on a path to energy security.