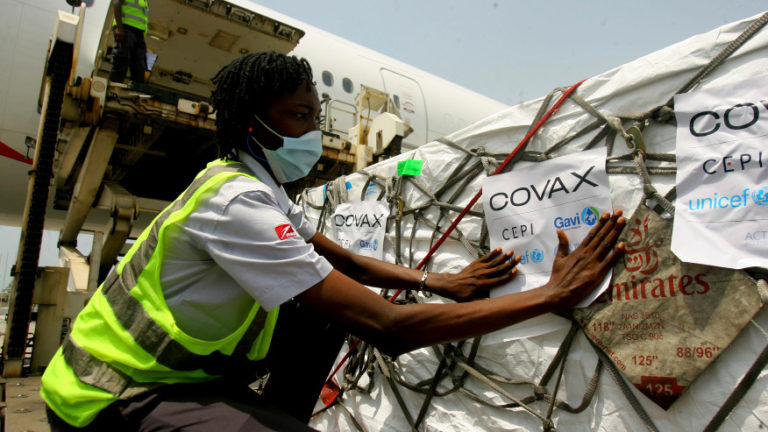 A shipment of COVID-19 vaccines distributed by the COVAX Facility arrives in Abidjan, Ivory Coast, Friday Feb. 25, 2021. Ivory Coast was the second country in the world after Ghana to receive vaccines acquired through the United Nations-backed COVAX initiative with a delivery of 504,000 doses of the AstraZeneca vaccine made by the Serum Institute of India. (AP PHOTO/DIOMANDE BLE BLONDE)

During PAHO’s weekly press briefing, Etienne insisted that vaccine deliveries are picking up throughout the region and that PAHO’s Revolving Fund is placing orders on behalf of the region and working together with UNICEF and vaccine manufacturers to organize deliveries as quickly as possible.

She noted, however, that “there is still much work to do”.

“Right now, we have just two vaccine manufacturers that are dispatching millions of doses to dozens of countries around the world,” she explained.

“This is a bottleneck that still prevents us from getting vaccines to every country at the same time.

“But shipments will become more regular as more doses are available to COVAX in the next few months.

“Next week, we expect that many countries in the Caribbean will start to see the first COVAX shipments arrive on their shores.

“Our goal is to ensure that every country in our region that is participating in COVAX receives their first shipment before World Health Day, April 7th.”

PAHO said yesterday new cases of coronavirus have picked up speed in about half of the countries in the region of the Americas and Caribbean, consistent with the nearly 70 percent increase in infections week-over-week in The Bahamas.

Etienne noted that nearly 138 million doses of COVID vaccines have been administered in the Americas — though just 28 million of these have taken place in Latin America and the Caribbean.

Jamaica was the first country in the Caribbean to receive COVID-19 vaccines from COVAX, with 14,400 doses, and is expected to continue receiving doses through May until it reaches an allocated 124,800.

COVAX has also reportedly secured over 100 million doses of Johnson & Johnson’s Janssen COVID vaccine in 2021 and up to 500 million through 2022, with doses expected to start arriving in July.

The World Health Organization (WHO) just last week issued an emergency use license for the Janssen vaccine, making it the fourth vaccine to be authorized by WHO.

The government has previously said it expects to receive more than 30,000 doses of AstraZeneca through the COVAX Facility, to which the government made a $250,000 down payment, before the end of this month.

The remainder — more than 60,000 doses — are expected to be received before the end of May.

Etienne urged countries to continue to rely on public health measures — including social distancing, wearing masks and avoiding large gatherings — as they wait their turn to receive vaccines.