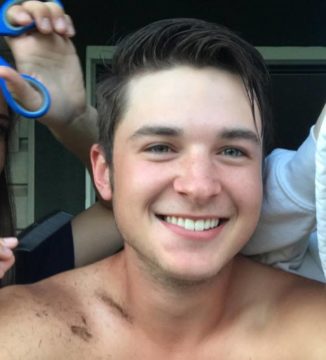 An extensive land and sea search that reportedly stretched for miles has turned up a body part, believed to be that of the young tourist who was hurled into the Atlantic Ocean by a treacherous wave that hit Glass Window bridge early Monday morning.

“We did in fact find partial remains and we will now have to make a determination of whether it belongs to the man who was washed over the Glass Window bridge,” the chief superintendent said.

Local fishermen, according to the island’s police chief, found the leg on land while they were doing work in the area, which Eyewitness News Online understands, is near Daddy Joe’s Restaurant, in the settlement of Gregory Town.

He said the area was previously flooded making it difficult to search during the initial search and rescue effort. Once the water dried up, he said, fishermen went back and that’s when they found the leg.

A source confirmed that the leg was intact from the knee down.

“At this present moment, we are awaiting the results of a DNA test. How long it takes will depend on the lab. We sent samples to a facility in the United States which will be compared with DNA from some of his personal effects, as well as DNA samples from both parents, to help in the final determination.”

Jonathan Brussow, 19, was on the bridge with a friend around 7 a.m. Monday, as severe weather battered the structure.

A wave described as treacherous, lifted the Rockford, Michigan resident and his friend, only identified by island officials as Aaron, and threw them off the edge.

Aaron, police said, landed on the rocks and was able to pull himself up safely, while Brussow never surfaced.

Rise to the occasion

Brad Brussow, the father of the missing man, has been on the island since Tuesday and is said to been holding on to hope that his son would be found alive.

Administrator for Central Eleuthera Gilbert Kemp said, he has been in constant contact with Mr. Brussow, who he said, seemingly cannot stop himself from looking at the sea.

“The father and the mother are just broken. But what I take pride in as a Bahamian is how the community rose to the occasion to take them in and ensure they had everything they needed, from food to even a place to stay,” Kemp said.

“The best of our people was seen in this case because Bahamians made themselves available to that family and the friends of that young boy.”

The administrator pleaded with residents and visitors to take watches and warnings seriously, as this incident, as unfortunate as it may be, is a perfect example of why they must take heed.

“Bahamians were getting angry at us when we were telling them to stay away,” he said. “And they are still coming with their cameras and drones flying over. So, before we were able to get a handle on things, they were posting and reporting. But now is not the time to play with ones life.”