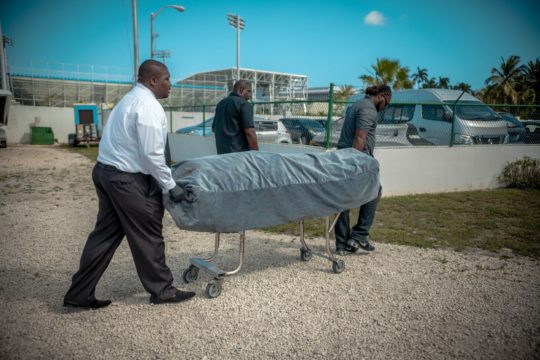 Police and mortuary services remove the body of the deceased diver from Bay Side Marina.

Marines from the Royal Bahamas Defense Force (RBDF) on Good Friday discovered the body thought to be of the diver who was reported missing since Wednesday afternoon floating in the area of Bayside Marina, East Bay Street according to police reports.

Police Superintendent Shanta Knowles confirmed Friday afternoon that while police were on harbor-side watch duties, a body was found. She said it is believed to be the missing diver reported in Eyewitness News reports earlier this week.

“We found he was wearing fins and a mask and that’s one reason as to why we suspect he is the missing man since Wednesday,” she told reporters.

On Wednesday Eyewitness News received information from the police that a man, believed to be Bahamian, was  diving for conch around 2:00 p.m. with a friend when he never resurfaced.

Knowles also sent out a warning to Bahamians to exercise extreme caution while being on the beach this holiday weekend.

“Around this time is the ‘beaching’ season for most of us,” she said. “We want responsible parents. Know where your kids are at all times. Know how many kids are in your party.”

Knowles also requested for motorists to exercise caution and care with pedestrians and themselves while on the roads.