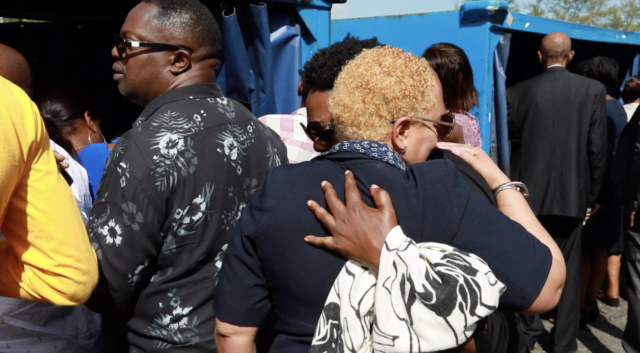 NASSAU, BAHAMAS – The continual wails from relatives of Blair John and his friend, Bahamian diplomat Alrae Ramsey, broke the eerie silence of the customs cargo area of Lynden Pindling International Airport (LPIA) yesterday afternoon as the bodies of both men were returned home, three weeks after they were found floating in the Po river in Turin, Italy.

The bodies arrived on a British Airways flight from Italy shortly before 4 p.m. in two large blue steel containers labeled ‘C11’ and ‘C8’.

The containers were loaded onto a cargo vehicle and driven to the loading bay where relatives, government officials and mortuary personnel were waiting.

As each container was opened, a single wooden coffin was revealed inside.

The families were advised that John, a Saint Mary’s University graduate student who was attending a psychology conference in Turin, was in the container to the left, while Ramsey, who was on study leave in Vienna and was reportedly in Turin on break, was on the right.

In turn, relatives of both men crowded around their coffins.

John’s mother, Cathleen Rahming, who had to be supported on both sides as she walked toward her son, wept uncontrollably.

Anita Ramsey, the mother of the foreign service officer, screamed, “My baby, oh my baby.”

Another relative of Ramsey laid her head on his coffin and wept as she said, “I miss you.”

As the coffins of both men were lifted into separate hearses, relatives looked on and sobbed.

Some held each other, while others had to be consoled.

The families did not wish to speak to the media, opting to grieve in privacy.

The body of Ramsey, 29, was pulled from the Po River in Turin on June 5.

A day later, John 28, was found in the same river.

Italian authorities concluded that the deaths were accidental by drowning.

According to a toxicology report, both men had drank, however, the levels of alcohol found was not “so high as to make them completely drunk”.

Addressing the media in the Airport VIP Lounge before the families were reunited with the bodies of the men, Minister of Foreign Affairs Darren Henfield said the return of John and Ramsey to The Bahamas mark the first phase of the healing process.

“Today, marks in my mind the first phase of this event with their repatriation to The Bahamas,” he said.

“They are being accompanied by Sharon Brennen-Haylock, who is the director general in foreign affairs.

“The families are all gathered here.

“We have been personally involved with the families since day one and we are happy to have them here today in the VIP lounge so they can witness the removal of the bodies and be a part of what I think is part of the healing process for the families and for the country.”

The minister said the government’s handling of the sad and tragic incident, “which has attracted the attention of the entire country and even some parts of the international community,” has had the families at the forefront.

He asked the country to continue to pray for the John and Ramsey families to guide them through “this dark hour”.

Ramsey will be laid to rest at St. Agnes Anglican Church on Baillou Hilll Road at 10 a.m. on Saturday.

The funeral service for John will be held at Evangelistic Temple on Collins Avenue at 1 p.m., also on Saturday.