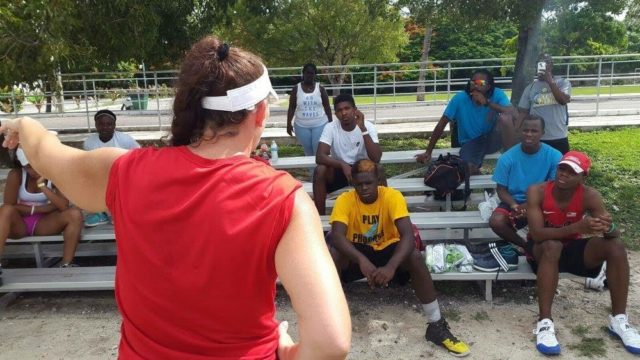 The camp, which runs from 9:00 a.m. to 3:00 p.m., caters to athletes from ages 12-18, and places emphasis on all four aspects of the throws, including javelin, the discus, the shot put, and the hammer throw.

Also, for the third year in a row, American throw coaches April and Bob Smith will assist Blue Chips head coach Corrington Maycock with the camp.

“The point of having this camp is to bring more attention to the throwing aspect of local track and field,” Maycock said.

“At one point in the 1980’s, The Bahamas used to be a dominant force in the throwing events. Now, we are starting to make some headway in the right direction once again. We have been doing well against everyone around the region and now I think it’s time we get more kids involved with the hopes of garnering collegiate scholarships.

“Most people think you have to be a heavy guy or girl to compete in the throws, but that’s really not true. We are looking to recruit basketball players, volleyball players, sprinters, or anyone with an athletic background really.”

Several former campers have earned scholarships from their time at the camp, and now Maycock is hopeful that even more undiscovered talent will come to the light over the course of the event.