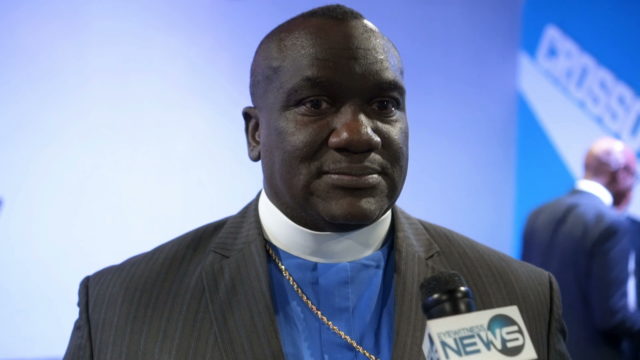 Says Bahamians must be spurred to take action

NASSAU, BAHAMAS – On the heels of a mass shooting in Montell Heights over the weekend, which injured 15 people, including a 10-year-old girl, President of the Bahamas Christian Council, Bishop Delton Fernander, charged on Monday that Bahamians must be spurred to action if they want to bring the existing crime scourge under control.

“I think as a country we must look at ourselves and now be called to action,” said Bishop Fernander, who told Eyewitness News Online yesterday that he was expressing his ‘personal views’ and not those of the Bahamas Christian Council.

“If a 10-year-old who is shot twice does not spur us to a place of action, we are going to spiral into a different direction if we don’t do something.

“It does not mean that we will have all of the answers, but we just can’t sit back and accept things as they are.

“I think we must give room to the Commissioner of Police to be intentional, and sometimes intrusive, in the apprehension of those who carry out these senseless shootings.

“These guns are on our streets and they are travelling in vehicles, and so there must be massive stops all through the island at various times and as citizens we must bear with it, because we must bring these weapons of military destruction or any weapons on our streets to a halt.

“We must send a strong message that as a society we will not tolerate this kind of action.”

As of yesterday, the country’s murder count stood at 46, with the last three murders occurring just last week, according to Eyewitness News Online records.

A double homicide occurred last week Friday, June 28, on Jupiter Way in Star Estates. As of yesterday, police did not confirm the identity of the two men shot, but Eyewitness News Online understands that one of them is Ian “Irie” Porter who was said to be known to police.

Also, last Thursday, June 27, an adult male was shot dead in the area of Calvin and Linkford Streets off Soldier Road. The victim has not yet been identified by police.

These three murders that occurred last week were soon overshadowed by a mass shooting that occurred shortly before midnight on Saturday at a baby shower and birthday party in Montell Heights.

Yesterday, Bishop Fernander said there are a number of “citizen policing” initiatives that Bahamians can adopt in order to tackle the existing crime issue.

“Each one must look out for the other. If you see [suspicious] vehicles in your neighbourhood, report it. We have to be virtual communities, but to do that, we must know what is going on in our communities. We must be aware and we must be willing to pass information on and stop this kind of senseless killing.”

Bishop Fernander said the Bahamas Christian Council has also launched ‘Operation Restoration,’ where they have partnered with Dr. David Allen, head of the Advisory Council on Crime, to examine how churches can get involved to address the criminal element.

“The churches are willing to launch a test case in short order to show how we can curb the actions that are taking place in our community if we get involved. We have talked about occupying a block [in the community] and if we are not afraid of these rascals, we must take back our community.”

Meanwhile, Bishop Fernander said news of the shooting in Montell Heights over the weekend “touched home” for him as he grew up in the area.

He noted that despite what has been said about the area, there is still a lot of good in that community.

He expressed that it was sad that persons in the area were unable to celebrate something as simple as a birthday party without it being marred by a “senseless shooting”.