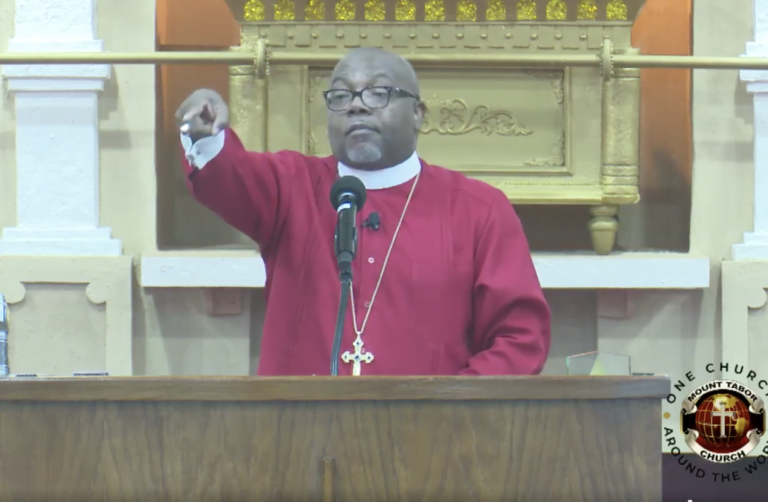 NASSAU, BAHAMAS — Mount Tabor Church Senior Pastor Bishop Neil Ellis yesterday gave a scathing rebuke of the Minnis-led administration as he expressed opposition to the extension of the emergency powers orders for another month.

During his sermon, Bishop Neil Ellis prefaced his comments by quoting a passage from the Book of Daniel about King Nebuchadnezzar, whom he said was caught up in an exaggerated sense of his own self-importance and sought to deify himself or put himself on the same level as God.

“That’s always a dangerous place to go for kings, and rulers, and prime ministers, and presidents got to be careful when they set themself up in an undemocratic fashion because sooner or later you become so bigheaded that you begin to act like a God,” he said.

Addressing the House of Assembly last week, Prime Minister Dr Hubert Minnis announced the resolution will be tabled at the next sitting to extend the public state of emergency to November 30.

Ellis accused FNM parliamentarians of being “spineless” for allowing the lockdowns and extension of curfew to continue unchallenged.

“How dare y’all? Having been democratically elected by our people because you’re spineless and trying to protect your territory….and you don’t have enough spine on the inside to stand up and say no more lockdowns, prime minister, we will not extend these curfews, we will not give you an extension of the orders another month.

“How in the world did we get like this,” he added.

“This is no longer cute. It was alright for the first two or three months while everyone was trying to get their composure and understand this virus but eight months in? if you’re gonna ask for an extension at least make a case. Don’t just come I want an extension for another month and hook lock and sinker all of your men and women vote for it.

“How dare y’all? You are insulting our intellect and parading on our democracy and sidelining our right of movement and humiliating our business owners and entrepreneurs. You’re one-man-stand is killing our economy. It sure doesn’t help when the one in the chair does not believe in God.”

Ellis also took aim at the government for the recent decision by Bahamas Power and Light to cut power to some 9,000 residents for nonpayment; Minister of Education Jeffery Lloyd over his public spat with teacher’s union president Belinda Wilson; and House Speaker Halson Moultrie for his challenge to the government over longstanding issues with his office.

For his part, Free National Movement Chairman Carl Culmer said he was baffled by Ellis’ sermon and furthered Minnis is a Christian and member of the Catholic community.

The FNM chairman said it was unfortunate the bishop used a global public health crisis to unleash a “nasty political attack”, and defended Minnis’ use of the emergency powers to mitigate the spread of the virus.

“In the Christian tradition it is only God who judges the heart and the faith of one his children,” said Culmer.

“Bishop Ellis should know this.

He continued: “It is unfortunate that Bishop Ellis would use the pulpit where he was expected to provide an uplifting message of hope to his congregation to launch a vicious, mean-spirited political attack on the Prime Minister of our country, who is working hard to keep Bahamians safe during the worst public health crisis in our country’s modern history.”

He called on Ellis to acknowledge the seriousness of the COVID-19 crisis and to help spread public health safety guidelines.

Culmer added: “This is a low moment for Bishop Ellis and our country. I will keep him in my prayers.”

Bishop Ellis is right, this ain’t political the government is letting power go to the heads!

First our government needs to provide food, water, masks and gloves for our people to last for as long as lock downs persist. Then keep the county locked down until it is safe to reopen. It also needs to keep those possible COVID-19 hot spots (house of the lord/ baal) closed. All Religion are man made idolatry and false worship. It is why COVID-19 is here (and worldwide) in the first place. In fact, Churches should remain closed to rid our land of what YHWH (YahWah/ the true creator) seems to be abominable sins. According to scripture, their alters should be destroyed.

I agree in something’s Bishop Ellis said but as Bishop he should stay out of politics.. He should if asked give advice. Not give his position on how the PM should run the countery.He should stick to preaching about religious matters. Keep his opinions to himself . leave running the country to the politicians. Some of these religious leaders think they are great influence and can away the mass . Separate yourselves from politics, the two do not mix

Many of the “christian” leaders feel its there duty to get involved with politics because the Bahamas is said to be a “Christian nation. With your suggestion there has to be a constitutional amendment that clearly has a separation of church and state. In the Bahamas there as always been a fear of “Religion”. While I agree with you, there are many Bahamians that have been brainwashed and conditioned by the various “christian” leaders.

you are so right

Neil Ellis needs to stay out of politics.
This is why I stay out of church like his, see I call him Neil Ellis, he might need to go back in the chicken business he might be better there.
The last Bahamian pastor who talk like him meet a untimely death sad to say. Mr. Ellis please read Matthew 22 in its fullest. .