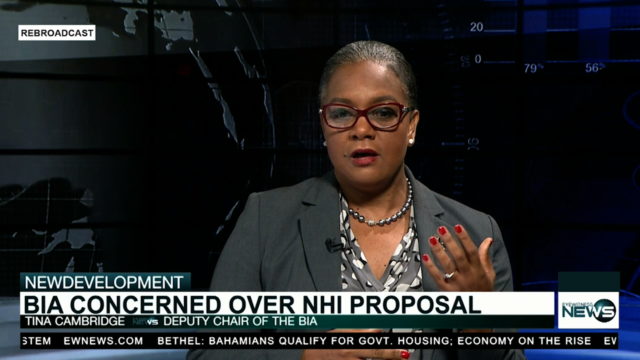 The Bahamas Insurance Association (BIA) is concerned that the proposed annual $1,000 National Health Insurance premium “is a gross underestimation of realistic premiums to cover the conditions which are common among Bahamians.”

In the Policy Paper for the new NHI, the National Health Insurance Authority said the new program will provide comprehensive coverage for select conditions that have a high prevalence in the Bahamas including breast, cervical and prostate cancers as well as end stage kidney disease and heart attacks.

However, the BIA said the $1,000 a year or $83 dollars a month which will be required to be paid per person may not be enough.

The BIA also believes the timeline to roll out the new benefits is “unrealistic and not feasible” and if approved at the end of the 45-day consultation period, the launch should be pushed back until January 2020.

“We presume that all things being equal, approval for the revised plan may be granted between December 2018 and January 2019. This leaves only three to five months for the design and roll out of the SHB by the NHIA. While this does not relate to the launch of the SHB by private health insurers, we recommend that the NHIA reconsiders the feasibility of this self-imposed timeframe,” the BIA said.

“It is imperative to note that from our experience as health insurers, the product development life cycle takes nine to twelve months provided there are no intervening unforeseen circumstances. We therefore propose that the launch of the SHB by private health insurers which is scheduled for January 2020 be contingent upon the finalization of the benefits package, costing of the SHB, agreement of a reasonable fee/reimbursement schedule with healthcare providers and the conclusion of the consultation process with private health insurers.”

The BIA also noted that the current state of the public healthcare system is not up to par and the Public Hospitals Authority needs to work in tandem with the NHIA to upgrade the quality of care and service.

“Additionally, the current state of infrastructure within the public healthcare system is of great concern insofar as the proposed HCC program is concerned. It is important that the Public Hospitals Authority (PHA) and the NHIA work in tandem to upgrade the quality of care and service at the public facilities that will deliver care,” the statement outlined.

We note that the burden on the public healthcare system can be reduced by the delivery of care within private facilities. We understand that the NHIA has taken the position that the majority of the services are to occur within the public system and that Public Private Partnership (PPP) arrangements will be negotiated only for certain services to allow the overflow of patients.”

The recommendations were shared in a position paper, released yesterday, in response to the NHIA’s policy paper on the way forward for NHI.

Meanwhile Deputy Chairperson of BIA, Tina Cambridge told Eyewitness News last night that the potential of the program remains at a “wait and see stage” as there has been limited consultation with private insurers.

The National Health Insurance Authority (NHIA) proposed a $1,000 a year contribution from employees, but Cambridge said while the BIA believes this figure as “too low” it is unsure of what that true figure should be.

“We cannot give a figure at this stage as we have not been provided with the figures,” Cambridge said.

“There are a lot of parameters that go into costing,” she said.

“When we asked the technical questions to NHI they were not available. It leaves us to wonder if the negotiations actually happened or if it is now underway.”

Based on the lack of information, Cambridge said it is difficult to calculate a true cost.

The BIA, she said, is proposing an approach that would require a lesser payment over a longer period of time.

“Our view is that this is a journey for the long haul. We hope that they would look at phasing in contributions and benefits for a longer period of time. If government looks at point five percent as opposed to 2 percent, adding only lab fees for example, and match what the country can afford and what can be sustained by infrastructure. If we don’t take that approach I see it as being very problematic,” Cambridge concluded.

GENEA NOEL-FERGUSON contributed to this report.