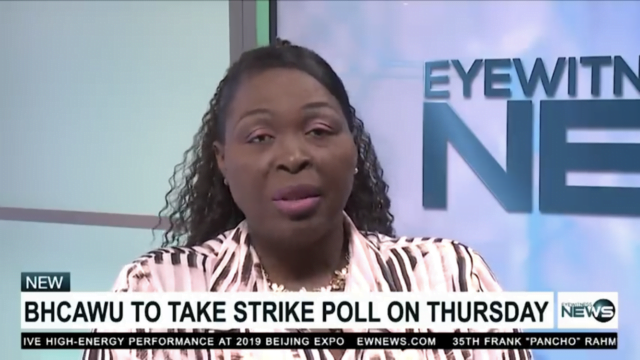 NASSAU, BAHAMAS – Sheila Burrows, the General Secretary of The Bahamas Hotel Catering and Allied Workers Union (BHCAWU), expressed on Monday that while some may frown on the union taking a strike poll, set for this Thursday, such a move is necessary as hotel workers are ‘hurting and unhappy’.

“Things have not been going good for them for quite a while. These persons have not had an increase in pay since 2012. It has been seven years, and for persons to think that we will try to hurt the tourism industry, that is not our intent.

“Our intent is only to have the hoteliers sit around the table with us so that we can negotiate a registered agreement for our members for better wages and better pay increases,” Burrows told Eyewitness News Online yesterday.

The BHCAWU’s strike poll will be held on Thursday, May 30, from 8 a.m. to 6 p.m. at the National Stadium and the BCPOU Hall on Farrington Road.

The BHCAWU has an issue with the offer of the Bahamas Hotel and Restaurant Employers Association (BHREA) –  the employers bargaining group that negotiates industry-wide industrial agreements –  which speaks to the elimination of the automatic 15 percent gratuity and delaying the payment of Christmas bonuses until the second week of January.

At a union meeting held at Workers House last Thursday, members burned copies of the industry’s proposal, claiming that the terms were a slap in the face to the union.

On Monday, Burrows told Eyewitness News online that her administration simply wants to make things better for hotel workers and the union will not sit by idly and allow the industry to take away what was already negotiated.

“We intend to build on what was already there,” Burrows said.

In addition to the elimination of the automatic 15% gratuity and a delay of Christmas bonuses, Burrows said the move to take a strike vote also came after the union experienced several issues with employees working at the Atlantis Resort.  She noted, however, that Atlantis was not the only hotel that received a proposal from the union.

“We sent a proposal to all of the hotels that are under the bargaining agent. Everybody got their proposal and then they [Atlantis] decided that they would like for the BHREA (Bahamas Hotel and Restaurant Employers Association) to negotiate on behalf of them.

“There were issues pending for quite a while where the hotel wanted to change the shift of the housekeepers in the Cove and the Reef Hotel [at Atlantis].

“These persons  have been working 8am to 4pm for some 30 years and they now want to change it to 9am to 5pm or 10am to 6pm. We held numerous meetings with management with the hope that we get persons to volunteer. They asked us to assist them and the union did.

“We went on both roll calls at the Cove and Reef asking for volunteers to work the 9 to 5 or the 10 to 6.

“Apparently, only three persons volunteered and everybody else was against it. So what they did was went against the wishes of the people and they put people on the 10 to 6 shift and the 9 to 5,” Burrows alleged.

The union’s secretary general said the change in shift was a move to “disrupt the lives” of hotel workers.

She said the union also had an issue with an implemented 12-point system to track late arrivals, but after going to the Department of Labour to complain about the system, it was later taken off the table.

“Then they came and they phased out the washmen at the laundry at Atlantis,” Burrows claimed. “They brought in a contract company to do the work. They then dispersed these persons in different areas throughout the hotel, but the mere fact that you disrespected these people…these people have to come to work and perform to the standard and there you have an agreement that you propose has nothing in there for them.”

Meanwhile, Burrows said she is asking all members under the bargaining agreement to show up at Thursday’s poll to exercise their right to vote.

Atlantis, Ocean Club and Harbourside will vote on Thursday at the National Stadium while Towne Hotel,  the British Colonial Hilton, Melia and Lyford Cay will vote at the BCPOU Hall on Farrington Road between the hours of 8a.m. and 6p.m.

Thursday’s poll, which may lead to possible industrial action, comes on the heels of union unrest in the public sector, with last week’s two-day sick-out at the National Insurance Board and the recent issuance of strike certificates to Water and Sewerage unions.