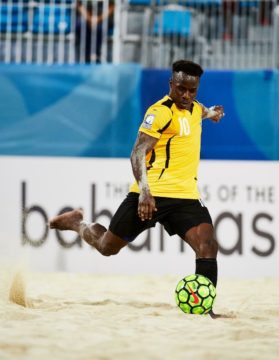 Lesly St. Fleur makes a move to the goal during team Bahamas’ 2-4 loss to the United States on Sunday. (Credit: Beach Soccer Bahamas.)

The Bahamas Football Association (BFA) yesterday named the team that will represent the country at the upcoming CONCACAF Beach Soccer World Championships.

The team departs for Puerto Vallarta, Mexico on May 11. Action in the sand runs May 13-19.

Last month, The Bahamas was drawn into Group C, along with the United States, Antigua and Barbuda and Bonaire.

The tournament begins with a round robin format, where teams will compete in four groups of four teams. The top two teams will advance to represent the CONCACAF region at the 2019 FIFA Beach Soccer World Cup in Asuncion, Paraguay, November 19- December 1.

Larry Minns will serve as the team’s manager. Luis Escobar Passos Da Silva is the head coach, and he will be assisted by Wilson DaCosta.