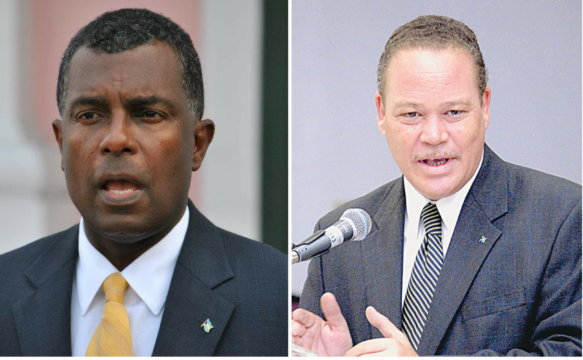 Immigrants that breach Bahamian borders and are caught “will be dealt with on site”, Attorney General Carl Bethel declared Sunday and said “the idea of bringing in a load of people to Nassau is over.”

Bethel was responding to criticisms raised by Progressive Liberal Party (PLP) Chairman Fred Mitchell, who questioned the government’s rationale for sending a delegation, inclusive of a magistrate to Inagua recently.

The magistrate convicted more than 200 Haitian migrants of illegal landing and they were subsequently deported.

It was reported last week that Prime Minister Dr. Hubert Minnis, who was acting as immigration minister, made the decision to send the magistrate.

In a press conference at PLP headquarters Sunday, Mitchell charged that the prime minister “has no legal role in directing magistrates.”

Mitchell stressed that this is important given the past interruptions in the House of Assembly by the Free National Movement (FNM), on the false accusations of judicial tampering made against former Member of Parliament for MICAL V Alfred Gray.

Gray was subsequently cleared of a police investigation into allegations that he used his power to interfere with the judicial process.

The AG however told Eyewitness News Sunday that when it comes to the directing of the magistrate to Inagua, the prime minister only suggested that such action be taken.

“I can assure you that as AG, I sought and obtained documented legal advice,” Bethel said.

“I received a suggestion from the PM and I was moved to seek and obtain legal advice. This is documented. I will show Fred this and any journalist this. That is a bogus allegation for Mr. Mitchell to make.”

Mitchell also hit at the present administration for sending a magistrate on the island when, “Island Administrators have the full powers of a magistrate and could have easily dealt with the cases in Matthew Town.”

In government’s defense, Bethel said that while the work of the Island Administrator is appreciated, in his view, a “legally qualified” magistrate was needed.

“For the most part, the administrators are not legally trained in terms of the quality of justice…,” Bethel expressed.

“We respect the work of our administrators… but because we had a mass amount of them [immigrants] and off of the issues that could have arisen, we wished to have a legally qualified magistrate.”

Meanwhile Mitchell continued to push for amendments to the Immigration Act. He said he believes that the practice of dealing with landings on site could tie up the courts in mistrials.

Although it took place in the past he said, it was stopped because it was not necessary in law and could result in a “nightmare” for the Judiciary and the the prison system.

Despite the mounting concerns, Bethel said this will be the way matter will be handled moving forward.

“This has been a conversation I’ve had with my colleagues in government … that we needed to tighten up the Immigration Act by way of the Bill…,” Bethel said.

“The government is determined that wherever and whenever landing takes place, the idea of bringing in a load of people to Nassau is over. They will be dealt with on site.”

The AG added that he has insisted that if someone has “papers” to be in the country, whether it be a birth or marriage certificate etc., they should not be deported.

Instead, they should go before the court for determination, he said.