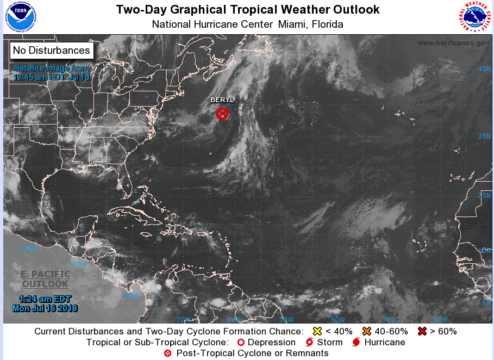 Tropical Storm Beryl, which had brought torrential rain to The Bahamas beginning late last week, has been downgraded to a tropical depression and is still said to be slightly active.

According to the National Hurricane Center, the remnants of former Hurricane Beryl redeveloped Saturday into a subtropical storm in the Atlantic Ocean.

Beryl, which was the second named storm of the 2018 Atlantic season and the first hurricane, made a lengthy northward journey from east of the Lesser Antilles to the Atlantic, east of North Carolina.

No coastal watches or warnings are in effect and the storm is not currently forecast to make any significant impact.

The storm’s maximum sustained winds are said to be about 40 miles per hour.

Forecaster also reported that the system would reach cold water north of the Gulf Stream over the weekend, with no intensity expected.

Once it reaches the cold water, forecasters predict it will dissipate by today, before it passes over Nova Scotia.