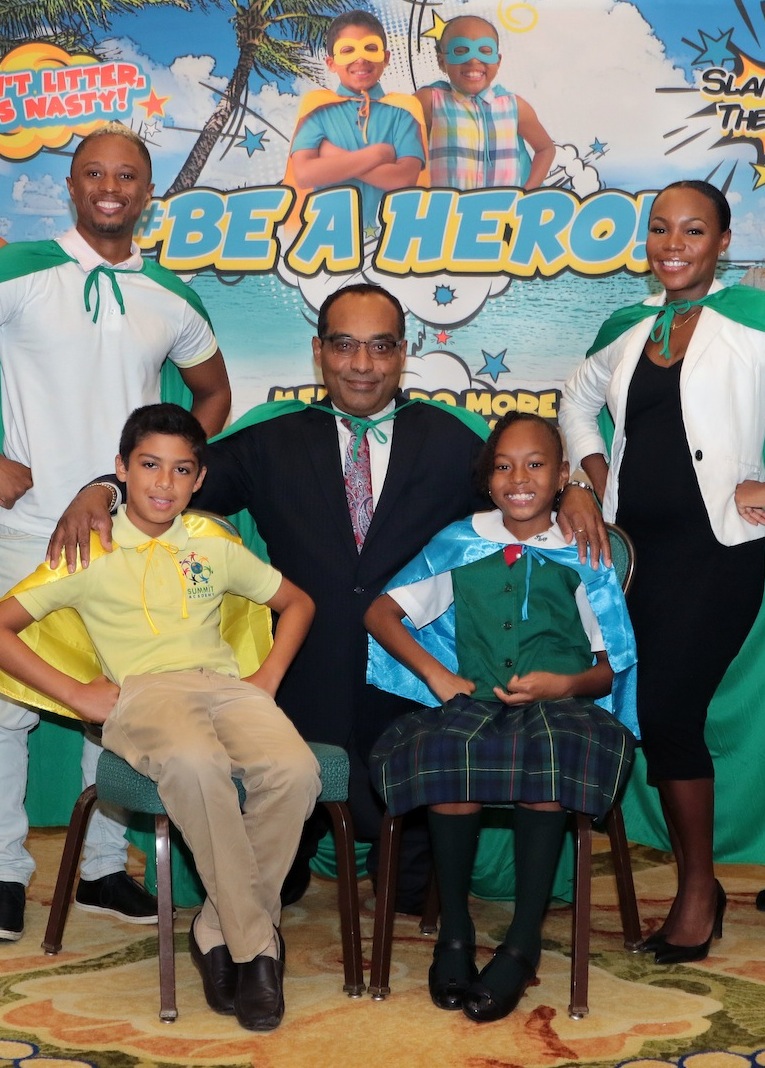 Environment and Housing Minister Romauld Ferreira is pictured at the launch press conference in the 'Be a Hero' cape with students, Avani Sawyer and Sebastian Major, the first two heroes, and with well-known Bahamian artists Wendy and Dyson Knight, heroes in the initiative, October 15, 2018 at Atlantis, Paradise Island. BIS Photos/Derek Smith.

The Ministry of the Environment and Housing, in conjunction with stakeholders, has launched an initiative designed to foster a greater sense of pride in cleaner, safer environments.

“Be a Hero, Make Your Bahamas a Clean, Safe Bahamas” campaign was launched Monday during a news conference at Atlantis, Paradise Island.

The second of a two-pronged approach, the “historic” initiative seeks to spur new thinking: primary and junior high school students are being challenged to influence adults to make a positive change in their neighbourhoods.

“We want students to be empowered to make a difference. We need them to be courageous and to stand up to anyone they see littering including their parents,” said Minister of the Environment and Housing, Romauld Ferreira.

“We also need them to discourage their peers and grownups from throwing wrappers out of a car window or dropping fast food containers on the ground.

“Shifting a national mindset includes helping young people to be sensitive and intolerant of littered verges and sidewalks and illegal dumping in vacant, overgrown lots.”

Participants are required to identify a project at their school or in the community to improve within a six-month period. Students will post “before” images on the ‘Be a Hero’ social media pages and update images on Facebook, Instagram, Snapchat, Twitter as the work progresses.

Schools will present winners at the end of the six-month period.

According to Minister Ferreira, the 10 new superheroes will be the winners of the project, who would have completed the best job, made the most impact on their street, neighbourhood or school and have gained the largest following on social media.

“Disrespect for property transfers into disrespect for authority. When our streets and communities are clean, crime decreases, community spirit increases, schools and students fare better and people feel liberated and happy in their environments,” said Minister Ferreira.

He noted that there are statistics which support the link between clean environments and safe communities.

“Research has shown that higher crime rates and more aggressive behaviour is exhibited by citizens who live in communities impacted by illegal dumping and strewn litter.”

An American study revealed that crime was reduced in highly dense urban areas of low-cost public housing in the United States when there were clean, green spaces,” said Minister Ferreira.

The Ministry of the Environment and Housing launched the New Providence Clean-Up Campaign in September 2017.

The initial project encouraged communities to unite to clean up neighbourhoods.

Another critical element of the campaign was a final resolution to the New Providence Sanitary Landfill for which Minister Ferreira said negotiations are progressing well with the expectation of a conclusion to the contractual agreement.

This article was written by KATHRYN CAMPBELL, Bahamas Information Services.