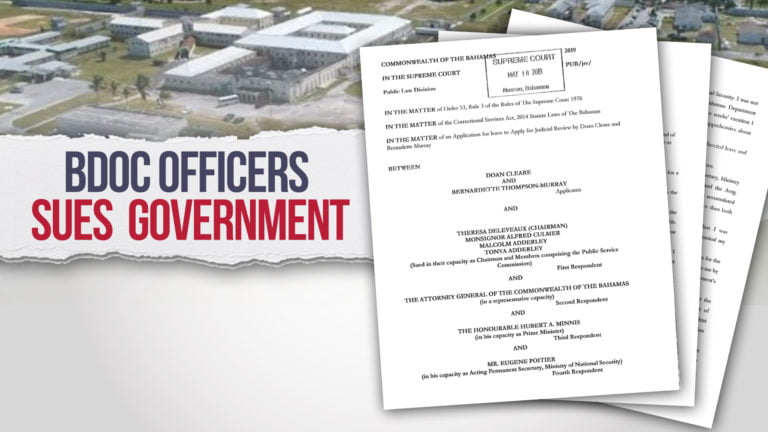 Duo claims they were forced to take vacation leave

NASSAU, BAHAMAS – Don Cleare and Bernadette Thompson-Murray, alleged in affidavits filed in the supreme court on Friday, May 10, that National Security Minister Marvin Dames forced them to take vacation leave to make room for the appointment of Charles Murphy as Commissioner of Corrections.

Both Cleare and Murray claim they were forced to take vacation leave last year from the Bahamas Department of Correctional Services (BDOCS), even though Murphy had more accumulated leave than both of them combined.

They also allege that upon returning from leave, they were prevented by the Acting Permanent Secretary from performing their duties.

It was also alleged that the move was political as it is claimed that Murphy openly campaigned for the Free National Movement (FNM) during the last election.

In her affidavit, Murray said she was acting as Commissioner of Corrections after former Commissioner Patrick Wright retired.

Murray claimed that during a meeting with National Security Minister Marvin Dames on August 7th, he made it clear that she will never be given the opportunity to become Commissioner, therefore she did not apply for the position as she was given the impression that the position was already filled by Murphy and the process of seeking an applicant was just a formality.

Murray, who has worked for the Department of Corrections for more than 30 years, said she believes she is either being forced to retire or be transferred.

She also claimed that Murphy does not meet the requirements as outlined in the advertised position.

In his affidavit, Cleare also claims that Commissioner Murphy does not meet any of the requirements set out by the Public Service Commission and is not qualified for the job.

In his affidavit, Cleare claimed that after returning from his 23 weeks of forced leave on February 23rd, the locks on his office were changed. Nevertheless, he said he applied for the commissioner position as he worked at BDOCS for more than 25 years and has the experience.

However, he said he was denied the position by the panel, which he claimed had no one on it with any experience to judge the appropriateness of the candidates.

Cleare further claimed that the panel’s chairman headed the FNM  Killarney constituency office between 2012 and 2017, which is the constituency of prime minister Dr Hubert Minnis.

Both Cleare and Thompson-Murrayare being represented by Munroe and Associates.