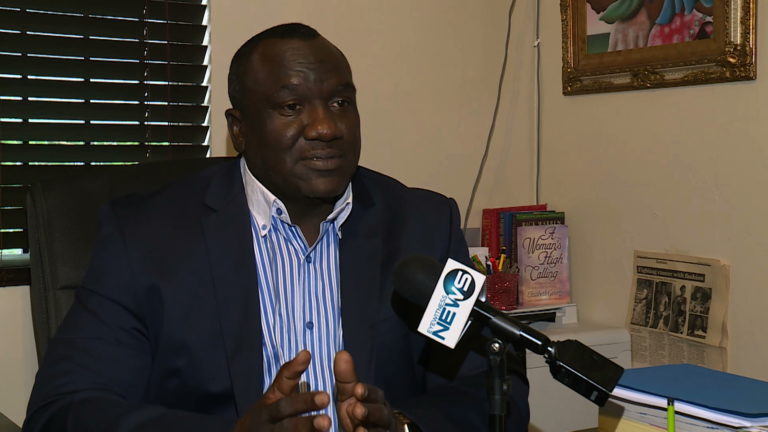 NASSAU, BAHAMAS – Bahamas Christian Council (BCC) President Bishop Delton Fernander said the significant decrease in murders and other categories of crime in 2018 compared to the previous year is a positive sign and gives the church hope that the initiatives launched last January could lead to some turnaround.

“I think any statistic that is moving in a downward trend means there is something happening that is moving towards a positive result,” Fernander told Eyewitness News Online.

“Is it completed, no. Does it need more work, yes.

“But it says that things are trending in a way that reduces what we are dealing with now as a society.

“We are more than thankful for the job that law enforcement and the courts, and all the agencies involved are doing, and I think some of the efforts that are being put in place will make a more holistic approach to the [fight against] crime.

“We wait to see, and to God’s grace we’ll see a turnaround in what’s been going on in our society.”

The last time the country recorded fewer than 100 murders was in 2010.

That year, there were 94 murders.

However, rape increased by 12 per cent.

It has yet to be seen whether other categories of crime have trended downward.

The commissioner is expected to release crime statistics for the year sometime this month.

The commissioner is also expected to release his policing plan for 2019.

In November 2017, Fernander said the BCC had seen the commissioner’s crime plan for 2018 and was impressed and confident it would work.

At the time, he said, “… I must admit I am impressed of what is being planned and what is being proposed and the minds around the table not just locally, but internationally and if everything goes as projected we should see a turnaround in short order.”

Speaking to Eyewitness News Online, Fernander said the BCC will focus this year on reaching out to young people in The Bahamas and hopes to attract international partners in intervening in the lives of the next generation.

He said the council will also prioritize pastoral training with international partnerships.

“The effort and focus of the council is to reach out to another generation and we believe if we share the gospel of Jesus Christ we will change the nation, and a generation,” Fernander said.

“Pastoral training is an important part of that and also we will be partnering with some of the entities to figure out what is our reach in terms of social outreach and how many food banks we have and clothing.”