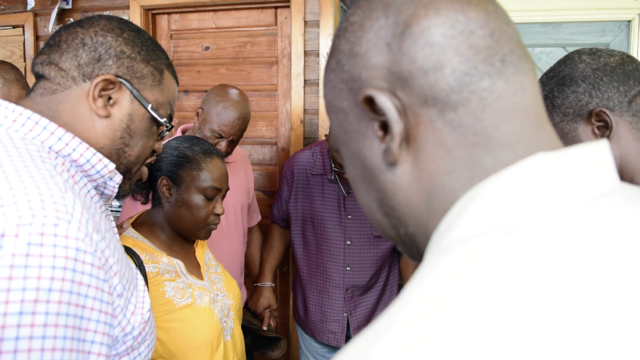 Four killed in less than 12 hours

NASSAU, BAHAMAS – In the aftermath of two double murders in less than 12 hours in New Providence, Bahamas Christian Council (BCC) President Bishop Delton Fernander yesterday said there is fear among the community and the church that the spate of recent killings could incite further violence.

Officers responding to reports of gunshots on Wednesday around 8 p.m. at Potter’s Cay Dock, a popular chain of restaurants near the Paradise Island bridge, found the bodies of two men near a stall with gunshot wounds.

According to reports, a gunman approached the men and shot them before running away.

Police also reported that shortly after 7 a.m. yesterday, three men were killed in a drive-by shooting in White’s Addition, off Kemp Road.

The third victim was listed in stable condition in hospital.

It was unclear if the incidents were linked.

During a walkabout in the Kemp Road community yesterday, Fernander told the media that the recent uptick in murders is cause for concern, notwithstanding the overall downward trend observed for the first quarter of this year compared to the previous year.

Noting that he had an opportunity to console the relatives of one of the deceased, Fernander said he was concerned about their anger.

“They weren’t concerned about what went wrong,” he said.

“They were hurt and wanted to hurt.

“And so, we were talking to them to try to relieve some of that anger and that pent-[up] frustration that their loved one was taken — in their mind — innocently.

“And so, we just prayed for them and tried to counsel them in that regard.”

Members of the BCC also visited Potter’s Cay Dock, where they prayed.

“That’s a place where people frequent,” Fernander pointed out.

“One of our pastors said he was there the night before just having a piece of fish.

“If this can be the way an evening could end, there is a fear in all of us.”

Fernander acknowledged the efforts of the government and law enforcement agencies geared toward conflict resolution and addressing the root causes of crime, and added that pastors’ “doors are open”.

He also underscored the importance of moving beyond the pulpit to reach people where they reside.

“We decided as pastors to just come out and do what we do,” the BCC president said.

“We asked the pastors in the community to lead us in a walkabout.

“We prayed with one of the parents. We prayed for the loved ones.

“We shared God’s grace. We moved about and tried to comfort the community and counsel those who needed counseling. We are a part of these communities.”

Responding to suggestions that the church could play a more pivotal role in the fight against crime, Fernander explained that the church often works without an audience and that work continues well after the cameras shut off.

To critics, he said, “Sometimes people criticize us just because they can criticize us. We are not going to fight back. This is [what we do] whether you like us or you don’t like us this is the church and all we simply want to do is help and share the gospel of Jesus Christ and lift others up. That’s our total agenda. We are not trying to be popular. We are just trying to be effective.”

According to Fernander, the Council plans to march in the inner-city communities in an initiative coined ‘Operation Restoration’ on June 15 — a day ahead of Father’s Day.

The event is hoped to attract hundreds of fathers.