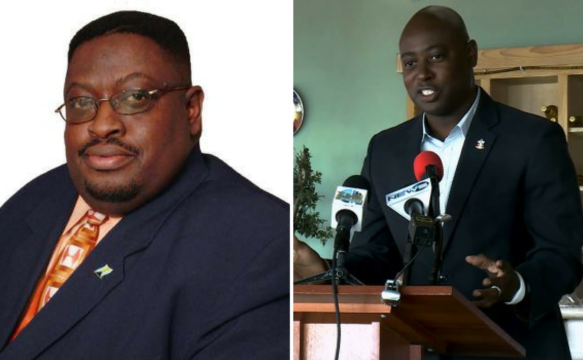 From left: Director of Labour, Robert Farquharson and President of the Bahamian Contractors Association, Leonard Sands.

Bahamian Contractor’s Association (BCA) President Leonard Sands said the Department of Labour’s endeavours in hiring skilled Bahamian workers would be better served if it were to partner with the BCA.

Labour Director Robert Farquharson told Eyewitness News Online Tuesday, that the department cannot hire people they are not aware of, who are actually more skilled than expatriates brought to The Bahamas on a work permit.

“We have very few Bahamian quantity surveyors and project mangers who are registered with our department,” Farquharson admitted.

“For the last year and a half, we’ve gone publicly on a number of public relations campaigns to say that qualified quantity surveyors, project managers and even those not as skilled, should register with our department.”

“Once you register with our department and applications come in to us, we can then go down the database and say, ‘no, here are the Bahamians we have qualified; hire them’,” he said.

Sands, however, said he feels otherwise, stating the labour department should instead, seek the advice of the BCA before making any suggestions and recommendations that only an expatriate is qualified for management jobs that arise in the industry.

“We’ve been conducting high level construction in this country from Atlantis and prior. Bahamians built the Cable Beach Hotel,” Sands said.

“It’s erroneous, inaccurate and downright reprehensible that the Department of Labour would state that qualified people in the construction industry needs to register with the department to become aware of potential jobs to match their skillset.

“What documentations that the investor provided the Department of Labour that says that these guys that they are hiring knows how to (in laymen terms) lift a bucket of cement.

“I’d like them to tell me. The National Economic Council (NEC) has also received such documentations because you are asking Bahamians to provide all that documentation; to stand in line to prove our credentials,” Sands emphatically told Eyewitness News Online.

Referencing the first phases of Baha Mar, Sands said, “I represented, at the time, the first phase (or second phase) of Baha Mar, a group of 15 Bahamian project managers who had international experience. Our group of 15 literally went to the human resources person of the company and I gave them personally all the contacts and information required for the job.

“Out of the 15, you want to know how many of them were hired? None. A project in our backyard and we couldn’t get hired. We did the due diligence.”

Sands indicated that registering with the Department of Labour does not guarantee a call that you are being considered.

According to Farquharson, however, his department works to ensure that those registered in the department’s database will get a fair shake at any opportunity presented.

“Once we have you in our database, any project manager position comes in we can say, “No, here’s 15 qualified Bahamians,” Farquharson said.

“Now, we can’t tell the companies who to hire, but we can at the very least provide 15 qualified candidates for them to look at first.”