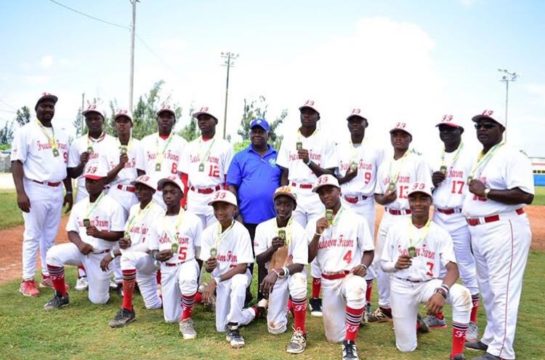 The Bahamas Baseball Association (BBA) on Monday made the call to use league rules to resolve the national championship games that were called off due to inclement weather over the weekend.
The Andre Rodgers National Baseball Championships were set to come to a close on Sunday at Emera Field in Grand Bahama, however, a heavy downpour left the field unplayable, forcing organizers to call the games. Only two games were able to be completed. The others had begun before the rain came down, but neither finished.
BBA Technical Director Shayne Albury said the association decided to award the respective winners in the 8-and-under, 10-and-under, 12-and-under and 16-and-under divisions rather than trying to play them out.
“Over the past day-and-a-half we’ve consulted with several of our international partners, as well as peruse the rules that we set for our baseball championships and based on those two things, consultation and the rules that we set, we decided that we will go with the winners of pool play and crown them champions as such,” Albury said.
“Before the decision was made, we knew that whatever the outcome, there would be disappointed players, coaches and league administrators. No doubt, we totally understand the emotions involved. We saw great baseball played over four days and despite the decisions made, all teams should be commended for their efforts.”
The results of the decision are as follows:
8-and-under: gold medal – Freedom Farm, 10-and-under: gold medal – JBLN, 12-and-under: gold medal – Freedom Farm, 16-and-under: gold medal – Grand Bahama.