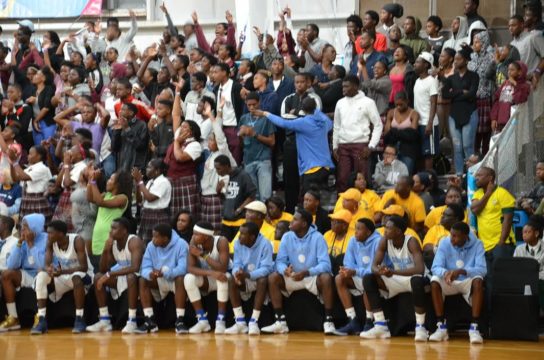 A full house cheered on during a senior boys division game at the National High School Basketball Championships Sunday.

The National High School Basketball Championships continues to gain traction among members of the local basketball community, as coaches from various islands say they consider this year’s tournament a “game-changer” and something that is needed to continue the development of the sport in The Bahamas.

This year’s tournament featured over 30 teams, competing across three divisions – senior boys, senior girls and Family Islands/small schools. The double elimination tournament is the only one of its kind, as it creates matchups that would otherwise never happen.

The four-day event pits the top 12 teams in the senior boys division against each other, and the top six schools in the other two divisions. Coaches Bowleg (C.C. Sweeting), Desmond Bowleg (Sir Jack Hayward) and Stephan Johnson (Agape) said, they are impressed with this year’s event and are looking forward to seeing the way it develops over the next few years.

Bowleg – who has coached at all three nationals said, competition at this year’s event was the best yet.

“This is what it’s all about. The top 12 teams vying for the chance to be crowned as national champions,” he said.

“Although this year things didn’t go the way I would have liked, it was some good competition. More events like this are needed, particularly at the junior level. That is the prime age for development, so it would be good to see them play some more games. But this is a solid way to end the year.”

Desmond Bowleg added, “When it comes to nationals, you have to bring your best every game, because you’re playing the best of the best. This type of competition is great when you’re trying to develop your players.

“It also provides the kids with something to look forward to when the school year is basically over with. The tournament continues to get better and I commend the Ministry of Education, Science and Technology for what they are doing.”

As for Johnson, he said the nationals provide Family Islands with a platform they probably wouldn’t have otherwise.

“The tournament is great as it as now, but you can’t rest on that,” Johnson said.

“You have to continue to find ways to improve what it is you’re doing. It’s great that our guys can get a chance to play in front of a large crowd and the cameras. A lot of teams don’t get to travel or play top notch competition all the time, so this is great in that regard.”

Ministry of Education, Science and Technology Senior Education Officer Evon Wisdom, who is also the nationals organizer said, the ministry is already looking at ways to improve next year’s event.

“When kids come up to me and say that they appreciate the way we’ve looked out for them by providing this opportunity for them to display their skills at a televised event, it makes it all worthwhile,” Wisdom said.

“Although the event has improved significantly, there are still some little tweaks we want to make moving forward.

“Off the court, this event is just great for Grand Bahama. What this does for the economy and the people here means a lot. We’ve spent a significant amount of money to keep the event here, so like this, everyone benefits. Kids get to travel and experience new things and the economy gets a much-needed shot in the arm at a time that is usually slow in regards to tourism.”

Thirty teams from around the country competed in this year’s championships. The Islands represented at this year’s event include North and South Andros, Abaco, Long Island, New Providence and Grand Bahama.