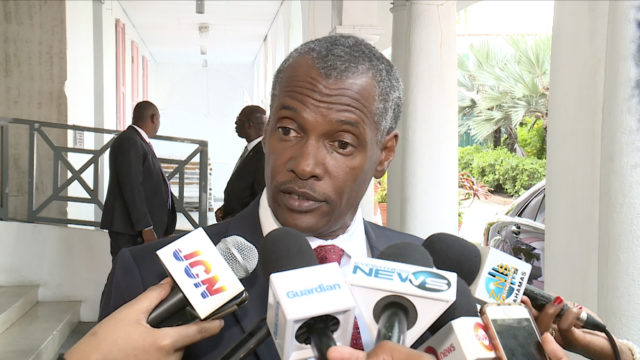 NASSAU, BAHAMAS – Amid what he called harsh public criticism of a mistake made by MICAL MP Miriam Emmanuel in quoting a figure during the budget debate, Minister of Public Works Desmond Bannister said yesterday that when politicians enter public life they expose themselves to public scrutiny.

Several ministers have defended the MP since the incident, which was ridiculed and became the butt of jokes on social media.

“Mr. Speaker, that mistake by the honourable member was one minute in her life,” Bannister said during the budget debate in Parliament.

“It does not define her. It was a mistake, pure and simple.

“I know the honourable member for MICAL to be a caring, decent mother, wife and member of Parliament.

“She has a passion for the people of MICAL and she works every day to improve their condition.

“She is a law-abiding citizen.

“She is a mother and wife who sets the type of example that our young people can look up to, admire and emulate.

“She is my friend. She is the virtuous woman that the bible speaks about.

“MICAL, I admire her for who she is and her outstanding commitment to [her] family.

“We are fortunate to have her in this Parliament. Once moment does not define her life.

“I encourage her to continue to be the outstanding example of Bahamian womanhood that she has always been.”

During debate last Thursday, Emmanuel struggled to enunciate a numerical value in her written presentation.

The blunder, which was referenced into numerous memes, isolated as a recording and made into a caricature, was widely circulated on social media in the days that followed.

There were even suggestions from quarters of the public about the MP’s literacy, and ultimate competency to chair the Education Loan Authority.

The MP, who appeared on ILTV Studios’ ‘Beyond the Headlines’ with Clint Watson Monday, said she made a mistake, and while she was initially taken aback by the harsh criticism from some in the public, it will not stop her from focusing on her mandate to serve the electorate.

Yesterday, Bannister said he believes in democracy and freedom of speech and is thankful

To live in country where anyone can publicly criticize lawmakers and not fear that they will be exposed to any type of sanction.

“That right is precious in the Bahamas sir, and I will defend it with my life,” he said.

“Likewise Mr. Speaker, we are all human. We all make mistakes.”

The minister recalled during his tenure as minister of education that he struggled to pronounce a word during a commemorative event for the late Rex Nettleford.

He said in the audience were prominent Bahamians and renowned international scholars.

“I tried several times, but just could not pronounce that one word,” he recalled.

“This was the minister of education for the Bahamas.

“I felt embarrassed and I don’t think that I will ever be able to pronounce that word.

“So, Mr. Speaker I understand how my colleague and friend — the member for MICAL — felt in this place last week.

“She made a mistake in public on the high stage of Parliament.

“She was criticized publicly, harshly, [and] in some instances unfairly.”

But Bannister said he did not plan to criticize those critics as they had a right to say what they wished.

He read Dorothy Law Nolte’s ‘If a child lives with..’ poem, which speaks to children learning what they experience and offers parenting value.

The minister said his mother read him the poem repeatedly as a child.

The poem ends: “If children live with friendliness, they learn the world is a nice place in which to live”.

“Mr. Speaker, we all criticize others at times, but when people continually condemn, I feel empathy for them because I understand what they lived with as children,” he noted.