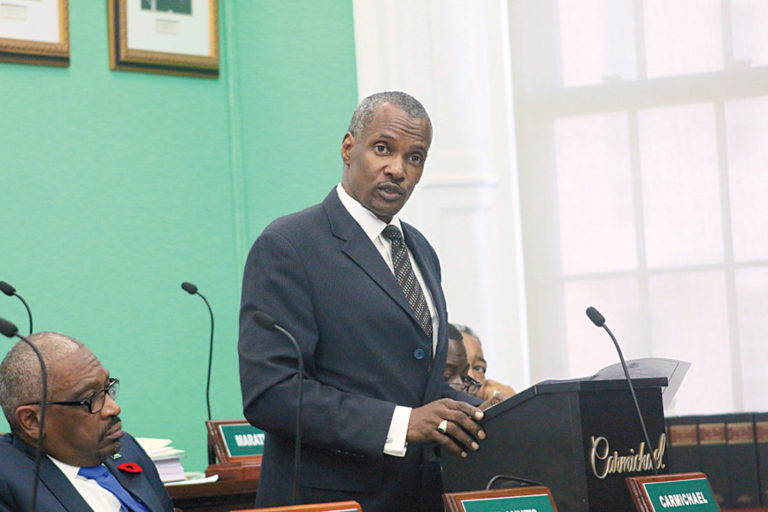 In a rare showcase of defense from across the lower chamber, Minster of Works Desmond Bannister said during his contribution to the mid-year budget Monday, he did not believe Opposition Leader Phillip Brave Davis greenlighted the Gladstone Road Waste Water Treatment Plant (GRWWTP) project.

The project left the Water and Sewerage Corporation (WSC) with a $18.3 million bill for the incomplete project, which had an initial cost of $9.6 million.

Bannister also said that while he would have personally never included the obituary of Davis’ mother in the report, he could not “interfere” with the work of the Ernst and Young (EY) auditors.

Last month, W&SC Chairman Adrian Gibson tabled a damming report in Parliament, conducted by EY, which revealed that Nassau Island Development (NID), which was awarded the $9.6 million contract by W&SC and was partly owned by a woman with the same name as the secretary in Davis’ law firm, Davis & Co – Merlene Poitier.

He said the report is a “witch hunt” and its only intent is to “smear and discredit without the input of others”.

Bannister said the audit was long overdue and someone will have to answer for the “wastage” at the WSC.

“Let me say this, I would never, Mr. Speaker, personally have put information in respect to the obituary of the mother of the member for Cat Island in the report, however Mr. Speaker it was not for me to interfere with the work of the auditor,” Bannister said.

“No Bahamian should overlook the fact that we spent $18.3 million on a project that was originally $9 million and still remains unfinished. We are all going to have to pay for that and the Bahamian people need to know who was it that brazenly authorized the payment of millions of dollars.

“There were very few people who had the power to do that, very few people and Bahamians no matter what their political loyalty may be, ought to be interested in helping us find out who authorized that.”

Bannister also said Poitier, the woman at the center of the controversy, is not a party to any wrongdoing and should not be accused as such.

He said, “Much has been made of the name Merlene Poiter appearing in that report. I know Merlene and I know her to not be a party to anything that is wrong and the person responsible must come forward and fix it. We must know who authorized that payment.”

The EY report revealed that Poitier owned a part of that company. However, addressing the media after the release of the report Davis explained that it was customary, according to corporate law, for there to be five share holder members incorporated. One of which, he said, would traditionally be an employee of the law firm.

The report, the W&SC chairman said, has since been forwarded to the Royal Bahamas Police Force (RBPF) for investigation.