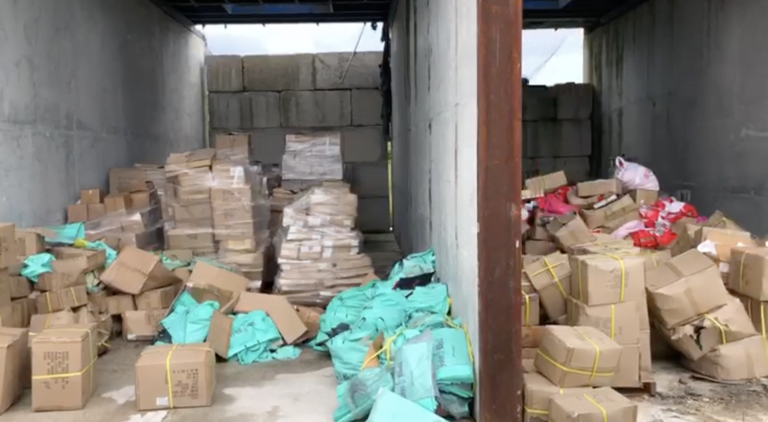 Banned single-use products being stored at the New Providence landfill until ready for export.

NASSAU, BAHAMAS — The New Providence landfill has received some 3,101 cases of banned plastic products in compliance with the ban on single-use plastics which took effect on July 1.

Minister of Environment Romauld Ferriera said yesterday that the Department of Environmental Health & Safety (DEHS) continues to monitor the receipt of the banned products at the waste disposal facility.

In a recent interview with Eyewitness News, Felix Stubbs, Chairman of the New Providence Ecology Park (NPEP), said those plastics are being stored presently, with the intention of sending it out of the country because there are no facilities to process the material locally.

“We have to have the technology so you can convert the plastic into some other material,” Stubbs said.

“There is no service here to do that and there’s no market here as yet to do that.  But there is a possibility of us packaging that plastic and sending it out of the country to other jurisdictions who would use that plastic and repurpose it.”

Asked when that is expected to happen, Stubbs said, “There’s no timeline and it hasn’t had our top priority.

“There are other issues that are more important, especially in the COVID environment, and trying to make sure we keep the landfill function and the plastics have not been not a priority.”

Senior Environmental Officer Dr. Rhianna Neely-Murphy said yesterday that the ministry is working with a company outside of the country to have the plastic bags upcycled.

“Those items will be transformed into things like outdoor furniture for uses in different ways other than their single-use,” Neely-Murphy said.

The ban on single-use plastics followed a six-month transition phase that allowed the four banned products: plastic bags, straws, food utensils, and Styrofoam cups and food containers – to still be sold in the country despite the importation ban.

Neely-Murphy explained that environment officers have been trained and equipped with notice books and are going throughout the country issuing notices to companies found with plastic bags or any of the band items.

She said those companies are given a period of time to become compliant.

“That work will continue until all businesses are compliant with the legislation”.

Prior to the introduction of the ban, the duty rates on reusable shopping bags and the alternatives to the “four-bidden” items were reduced to zero.

The Bahamas joined countries around the world to make a pledge to reduce plastic waste, and tackle the issue of marine plastic pollution on January 1.