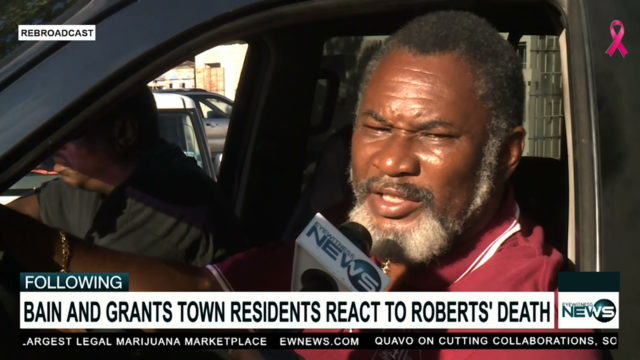 Just hours following the death of former Bain and Grants Town Member of Parliament, Bradley Roberts, Eyewitness News visited that constituency on Thursday to get feedback from residents who held fond memories of the long-serving MP.

Lidia Adderley was just one of many residents who expressed shock about Roberts’ passing, but she also expressed her love and admiration for the outspoken former parliamentarian.

“We used to call him ‘big bad Brad,’ and he was something else,” Adderley recalled.

“We are going to miss him. I can’t believe big bad Brad is gone. He was a wonderful man, and he did everything he could have done for Bain and Grants Town.”

Another resident, Cynthia Davis, said she did not believe the news that Roberts had died.

“I was asleep and someone passed and told me they heard Bradley Roberts had died in his shower,” she said.

Roberts, 74, was reportedly discovered yesterday by his wife slumped in the shower. An autopsy will be conducted to determine the exact cause of his demise.

“When he used to campaign I never saw him, but I remember his mouth was hard, but that was just him, and I can’t knock that. I would say he was a good MP, and [the late] Bernard Nottage [also a former Bain and Grants Town MP] was also a good MP,” Davis said.

“Bradley Roberts was one of the most upright PLP’s in the Bahamas. It’s a touching situation, I can’t believe I’m hearing this. I am heading to the headquarters now to pay my respects.

“We need more MP’s like him, we have Reece Chipman and the Travis Robinson, but we need more.”