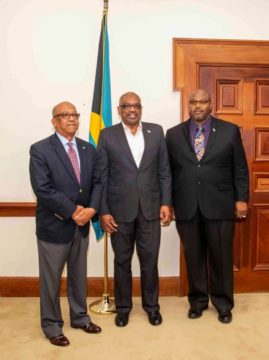 NASSAU, BAHAMAS – Chairman of the Rehabilitation of Offenders Committee Paul Farquharson is calling on first time-offenders with minor offenses and those under 21 to apply to the Ministry of National Security to have their records expunged.

Farquharson has ensured that all backlog applications have already been dealt with.

The committee was appointed in September 2019.

Under the Rehabilitation of Offenders Act (Amendment) 2015, people who have committed murder, manslaughter, treason, armed robbery, rape or possession of dangerous drugs with the intent to supply cannot have their records expunged.

All other offenses can be expunged on application to the committee.

“For many years there were a number of applications that was lying dormant in the Ministry of National Security,” Farquharson said in a recent interview with Eyewitness News.

“Once appointed the minister asked the committee to examine the backlog and I am happy to report that the backlog is cleared.”

He noted that the committee that dealt with the backlog was called the Prerogative of Mercy.

Farquharson furthered that, “several applicants [who] applied for expungement [that] were listed in the seven offenses that I told you could not be expunged based on them meeting a criteria.”

He said all of those applications have been dealt with as of the committee’s last meeting, which was held on Thursday.

“So we’ve cleared the backlog. It is now time for the general populous, those persons who affected by this process, who need their records expunged, can feel free to apply, pick up an application from the Ministry of National Security and make an application.”

The committee chairman noted that while other countries take up to a year to complete expunge a record, he would like to expedite the process it to six months.

Farquharson could not indicate how many records have been expunged thus far, noting that “there’s quite a few persons that have been dealt with” and “a number of applications that are being processed at the moment and everyday”.

“…Rightfully so, they, having served their due time and penance in society the state has an obligation to set the record straight and have those records expunged.”

The process of expunging records of individuals with possession of marijuana with small amounts has not begun according to the chairman.

However, public meetings will be held soon to advise more on the process.

Individuals are to fill out an application and provide two references.

The committee will then examine reports from the Department of Social Services, Royal Bahamas Police Force and Bahamas Department of Corrections on the applicant and conduct interviews if necessary in order to determine whether the applicant is qualified for expungement.

Too many grammatical errors in this article! No reason for that. Proof read your work please.