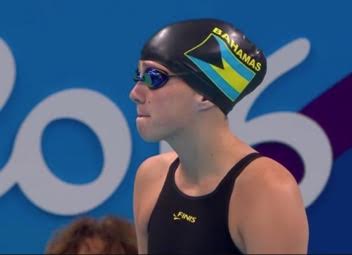 Out of the gate first for The Bahamas was flag carrier Joanna Evans.

The Texas Longhorn finished fourth in the opening heat of the women’s 200-meter (m) freestyle in 2:01.75.

Taylor Ruck from Canada, went on to win the event final in a new games record of 1:54.81.

Next up in the pool was sprinter N’Nhyn Fernander, who finished eighth in the men’s 50m freestyle in 25.39 seconds. Trinidadian Dylan Carter won the heat in 23.62 seconds.

In the final of the men’s triathlon, Cameron Roach finished 33rd overall in 1:11:31. Henri Schoeman from the Republic of South Africa, captured gold in the event in 52:31.

Australian Jacob Birtwhistle was second in 52:38 and Marc Austin from Scotland, mustered up a third-place finish in 52:44.

Boxers Rashield Williams and Carl Hield were also in action on day one, however, neither advanced to the next round of the competition.

Bahamian athletes won’t be back in action until Saturday. Lilly Higgs will be competing in the women’s 200m breaststroke, while Fernander competes in the opening heat of the men’s 100m freestyle.

The Bahamas is competing in seven events, including two for the first time- the triathlon and table tennis. Sydney Wells also qualified to compete at the games in gymnastics, however, she was not old enough to make the team.

Roy Colebrook is serving as the team’s chef de mission, with Cora Hepburn as the team manager and Derron Donaldson as Secretary General.

Former president of the Bahamas Olympic Committee (BOC) Wellington Miller, is also with the team as a Commonwealth Games Association (CGA) representative.