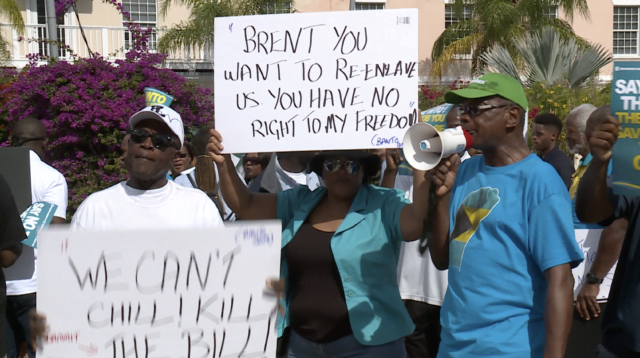 NASSAU, BAHAMAS – Scores of irate protestors gathered in Parliament Square on Wednesday, hoping that their cries would deter the government from acceding to the World Trade Organization (WTO).

But according to the protestors, it appears as if their concerns continue to fall on deaf ears.

“They have sent people to try to sell it [WTO] to us, but they have yet to ask us as a people,” said Stone McQuen, a member of Bahamians Against WTO.

“A company comes here, applies for 100 work permits. The foreigners they have brought in will come to work and work for a quarter of what they [Bahamians] will work for. This forces us to work for scraps and compete against foreigners in our own country.”

Paul Mailis, another protestor, said, “We need to stop this madness and stop this descent [to join the WTO].

“We need to form our own policies. We will have to reduce our own standards to accommodate their prices.”

The country’s accession to the WTO has led to ongoing discussions amongst many. However, Minister of Financial Services, Immigration, Trade and Industry, Brent Symonette told media that The Bahamas will continue to deliberate to ensure that the WTO membership provides Bahamians with opportunities for meaningful participation in the ownership and prosperity of the economy.

He stressed that any external shocks to such a vulnerable economy can set the country back significantly.

Meanwhile, Bahamians Against WTO also protested against the proposed amendments to the Immigration Act, stating that the clause that speaks to foreign nationals being able to come into the country visa free for two weeks, will have a negative impact on the fishing industry.

“We have Bahamians bringing in Dominican fisherman [and] Honduran fisherman to dive on compressor boats, replacing Bahamian labor and the one industry that is explicitly supposed to be reserved for Bahamians.

“And now with this [proposed] immigration bill, we want to open it up to allow people to come in here and work with no background check and no verifications…”

According to the group, Wednesday’s protest is just the beginning of several they are planning  to take in the future.