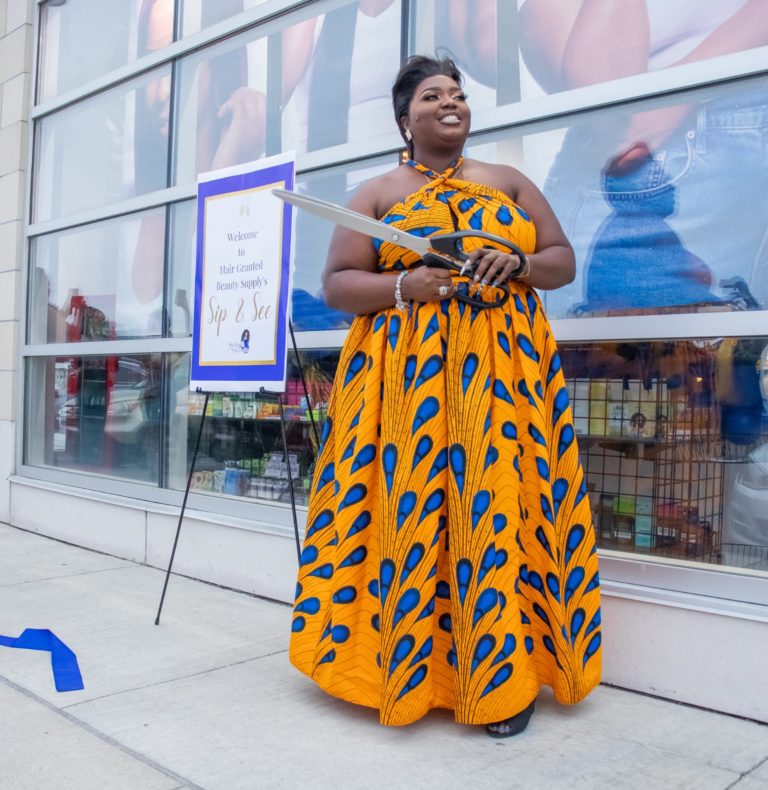 NASSAU, BAHAMAS — A Bahamian native has found entrepreneurial success with the successful launch of the largest black-owned hair and beauty supply store in Toronto, Canada.

Zhorrah Grant, the daughter of national sports icon, the late Tom “The Bird” Grant, told Eyewitness News that she had been “shocked” by the turnout at the opening of her business Hair Granted Beauty Supply Inc in late August.

“In Canada the beauty supply industry is primarily dominated by Asians and for me to open the largest black-owned beauty supply store in Toronto is something amazing,” said Grant.

“I didn’t expect to have a grand opening with people literally lined up around the plaza. My landlord called me and said you really have a lot of people out here. It was truly a shock.”

The business woman who holds a degree in criminology explained that she spent time researching the industry and even worked part-time with a beauty supply store starting as a customer service representative and then a supervisor to learn the “tricks of the trade”.

“I always had a passion for hair and beauty. I always told my mom I wanted to own a beauty supply store. It was a dream but something that really was in the background for me,” said Grant.

For Grant, who moved to Canada at age 14, the journey was not easy and compounded by the loss of both of her parents within the past decade.

“I have been living in Canada for the past 16 years, completed high school in Canada as well as university,” Grant said. In 2012, just two weeks prior to the end of final exams in university, my dad passed away. I found out about his passing on Facebook.”

Grant recalled that after completing her studies she returned home where she spent some 10 months searching for a job with no success.

“I wanted to be a youth probation officer,” she said.

“I never found a job. I returned to Canada and took up a teaching job in New Brunswick at a boarding school for a year before moving to Toronto.”

It was while pursuing an advanced diploma in 2018 that her mother died.

After her mother’s passing, she subsequently got a job with the Ontario government as a youth probation officer.

“I just was expecting to have a grand opening, some people would come and it would be just another day,” she said.

“I didn’t expect expect the turnout that I did. I just have kept my head down, put in the work and it has manifested into this.”

Am so…proud of you as a young Bahamian in a different land making a mark for yourself.

Hi, by the view it looks like you are well on your way.Congratulation Ms.Grant and keep believing and soaring.You did it!!

Congratulations Ms. Hanna and we are so proud of you. I remembered your mom as a student of St. John’s College on Market Street, Bahamas.

Very proud of you. Keep it up! Gods blessings upon you and your business

Reading of your story and success sent goosebumps all over my body. I am extremely happy and proud of you. A young bahamian entrepreneur doing it big in another man’s land. Continue to keep God first and you will continue to soar.

This is truly awesome. May the Lord continue to expand your vision. Well done Ms. Grant.

Awesome job!! Congratulations and may God continue to prosper you in the midst of farming.

Congrats Zhorrah! This is awesome. Continue to soar!

Congratulations Zhorrah! Proudly remembering your SJC roots! We are so proud of you! Blessings

Congratulations, this is awesome!! Continue to soar, you will do well.

Congratulations, may God continue to smile on you and be gracious unto you. Hard work does pay off BIG TIME.. Love it….

Congratulations Ms Grant, you did it!!

Excellent and congratulations young lady. Continue to do well and will definitely buy from your store when we vacation there soon.

CONGRATS WISHING YOU ALL THE BEST!

I’m so proud of you dear…. CONGRATULATIONS!! Take it all in stride as God has blessed you with this venture. It will be wonderful, just keep on praying & leaning on Him??. Your Angels are looking down & smiling ??!!

Ms. Hanna, you are an excellent example to not just Bahamians but to any individual who had a dream or vision to be successful in life. I pray that your business and in turn your life prosper always as you are well deserving of all that God has in store for you. Congratualations will be a familiar word to you as this is just the beginning of great news!

Congratulations!!!
May God continue to bless you

HELLO, ANYONE KNOWS THE NAME , AND ADDRESS OF HER SHOP?

MAY GOD CONTINUE TO RICHLY BLESS YOU IN ALL YOUR ENDEVOURS IN THE BEAUTY TRADE. ITS A LUCRATIVE BUSSINESS WHICH WILL GRANT YOU TOTAL FULLFILLMENT!
BE CONTINUALLY BLESS MY DEAR!

I am so proud of you Zhorrah… continue to soar the sky is the limit. God’s richest blessings continuely be with you.

Congratulations Queen! May God continue to guide and protect your path. Continue being a inspiration, to others and my self, your a Queen after my own heart. Going to be me pretty soon, I make all Natural Shampoo and Soaps in Eleuthera, Bahamas

You deserve this and so much ? more. I definitely will be supporting you and your store. God bless ? you!

Congratulations. You will inspire many persons. God bless your business.

Wonderful Ms. Grant. Keep it up. I LOVE to see Bahamians do well.

Congratulations and I will be driving to your location for my next purchase and those to come. Thank you for following through with your business idea in catering to a group of people that spend a tremendous amount of money in the Asian beauty supply stores and still continue get mistreated and looked down upon. God bless you with favour in this endeavour for as long you desire and may you multiply your business into many more across this nation. Peace love and prosperity sister! Be blessed!

Congratulations and may God continue to bless you richly! We are so proud of you soon so many different levels!

Good wishes on your special occasion.

Congratulations wishing you continued success lots of love. I had the privilege of catering to you as a young teenager .Also your Aunt Laura and also your mom before she passed.God bless.

I was really looking forward to supporting her but I was denied entry because I refused to used the hand sanitizer provided. I wasn’t trying to be difficult but I had a severe reaction that left my hands in blisters so applying alcohol only burn my skin. I explained this to staff show the evidence and even offered to wash my hands using soap and water but was a no go. So I left…… Regardless, good luck and all the best.