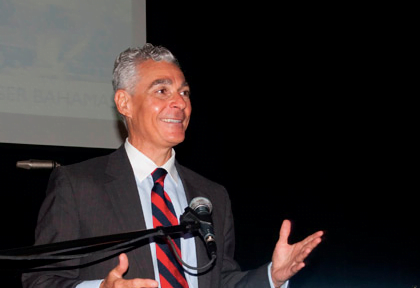 NASSAU, BAHAMAS — Llewellyn Boyer-Cartwright, a senior attorney with more than 25 years’ experience and a passion for aviation, has launched a law firm dedicated to aviation law.

Boyer-Cartwright said the opening of HarleyJames signals a future trend of specialized legal services, adding it was “the landing I had been searching for my entire life”.

Before opening his own firm, Boyer-Cartwright was a senior partner at the country’s oldest law firm where he specialized in aviation, real estate and Administration of Estates.

According to a statement, Boyer-Cartwright has been widely recognized as leading the campaign to create an aircraft registry in The Bahamas.

He explained that while The Bahamas has continued to look at aviation as a means to an end, bringing visitors to the country’s shores, it has largely ignored the greater potential of the aircraft industry as a whole.

That potential includes – registration, maintenance, leasing, insurance, financing and attracting those who register private aircraft here to expand their footprint in The Bahamas with residential and commercial investment.

“It is time to view aircraft not simply as vehicles that deliver visitors to our shores, but as the key to unlocking The Bahamas as a soon to be an emerging player in the aviation industry,” he said.

Boyer-Cartwright is a public speaker, author, a former director of the Bahamas Financial Services Board and has been a panelist in international aviation conferences.

He is a member of The Bahamas’ Air Transport Advisory Board which reviews and considers various applications by air operators both domestic and international.

“The sky is the limit, literally, for The Bahamas, once we fully proceed with the aircraft registry, which meets ICAO and other industry standards,” he said.

“I see aircraft hubs for all sorts of services in places like Andros or Grand Bahama or one of the islands in the southern Bahamas where it may be possible to service flights transiting to the Caribbean, Central and South America.”

One obstacle standing in the way of a registry now, said Boyer-Cartwright, is 12 percent VAT.

He noted that while the Customs duty of 10 percent on the import of aircraft was eliminated, the issue of VAT was never addressed, a matter he believes was an oversight.

“The registration of aircraft in most other jurisdictions is based upon on an annual fee, not a percentage of the value of an aircraft, usually calculated using a class and weight formula,” Boyer-Cartwright said.

“If VAT is not addressed The Bahamas will be unable to compete with other jurisdictions.”

“Despite the COVID-19 pandemic, the industry is poised to soar as there will be greater reliance on private aircraft travel. As we look toward serving that market whether from a regulatory, legal or financial aspect, the taxiway is wide open for a well-regulated and first-class civil aviation sector especially at a time when we have seen the need for economic diversity.”

The aviation attorney is also convinced that a new era is dawning in the legal sector providing young attorneys with new and diverse opportunities.

“Jurisprudence is one of the oldest professions in the world and while technology (as well as aviation) changes at breakneck speed, while law, in many ways, does so with less forward motion than many would like,” he added.

“I am excited to be part of the new wave of the future.”