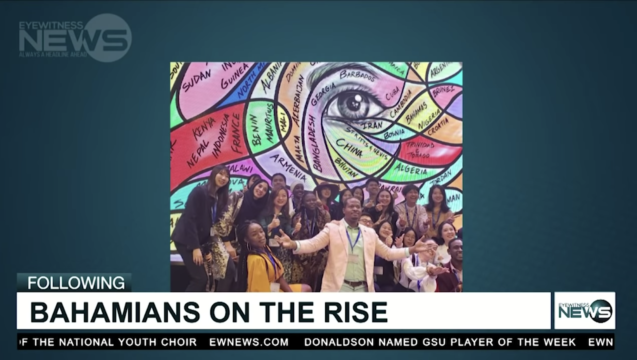 NASSAU, BAHAMAS – Bahamians have always found positive ways to put The Bahamas on the map and an art piece produced by Jamaal Rolle, the Bahamian celebrity artist, did just that as he unveiled a popular sketch at the recent UNESCO youth forum in China.

Rolle’s piece, known as “a vision united,” embodied the message of the third International Youth Forum on creativity.

Among the many delegates who admired the piece, Kitso Rantao, a delegate from South Africa expressed her admiration for the artwork.

“I think that if you look at it metaphorically, it speaks of how the youth are coming together to have a unified vision, which is something that previous generations could not see eye to eye” Rantao said.

The celebrity artist told Eyewitness News that what was supposed to be just a seminar for leaders worldwide, turned into an exhibition to showcase his talents, and for that, he is grateful.

“People loved it,” Rolle said, adding that officials at the event decided to allow him to do an official unveiling at the closing ceremony.

‘It really wasn’t about art; it was about young leaders from around the world who have made a contribution from various angles including intellectual subjects,” Rolle said. “As a Bahamian, I was just proud to be around the table helping with drafts and contributing.”

Rolle said that it was during a long four-hour long ride from Changsha to Nanjing, China that he began creating the masterpiece on his Wacom drawing tablet.

“I just can’t sit down and do nothing. Feeling all inspired and happy, I took that opportunity to take out my drawing tablet and started to create this drawing and as I got into it, people started filming immediately,” he said.

Rolle told Eyewitness News that the response that he has gotten has been amazing.

“It has garnered a lot of attention locally and internationally; however, I plan on partnering with UNESCO and making it some kind of official art piece,” he said.

Following this, Rolle said he will see how he could further leverage it for opportunities, but he has not gotten that far into the thinking process as yet.