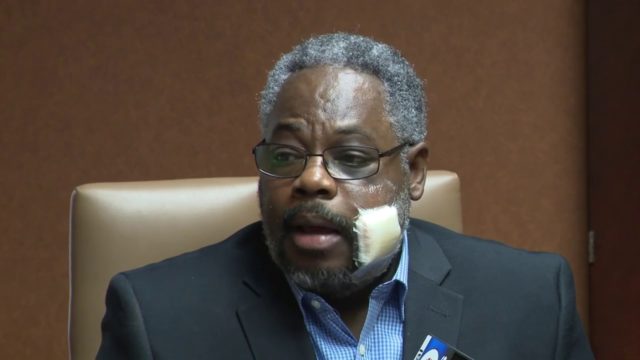 NASSAU, BAHAMAS – Harold Williams, a Bahamian who was attacked a little over two weeks ago while visiting a restaurant in Pembroke Pines, Florida to use the bathroom, told Eyewitness News on Sunday that he is taking legal action against his attacker and the owners of the sandwich store where the incident occurred.

Williams said as it now stands, his lawyer, Jasmine Rand, is in the process of getting the charges levied against his attacker upgraded.

“Right now the charges are aggravated battery and assault and this young man nearly took my life, so I know she is trying to get the charges increased to attempted manslaughter or attempted murder,” Williams said.

Williams, a manager at Bahamasair in Grand Bahama, was stabbed in the face by his attacker on Saturday, March 16, 2019, while in Pembroke Pines, Florida.

Williams told 7News Miami that he was out running errands and needed to use the bathroom. He said he, therefore, decided to stop at the Pines Market restaurant at 9610 Pines Boulevard.

Williams said while using the bathroom, he felt a “knock” on the side of his face and he initially thought that he had been punched.

“It wasn’t until I looked down and I saw him holding a kitchen knife that was 8 or 10 inches long, and then the blood started gushing everywhere and I realized I was stabbed,” Williams told 7News Miami.

He told the news station that he had no idea why he was attacked and he was lucky that the knife did not completely pierce his jaw.

Williams’ alleged attacker has been identified as Fawaz Hassan, a 24-year-old employee of Pines Market. He was taken into custody following the incident.

On Sunday, Williams, who is back in Grand Bahama but still off from work, told Eyewitness News Online that he was still experiencing the physical and mental effects of being stabbed in the face.

“Physically, my face is still swollen. I have taken the stitches out and every now and again I still have headaches but I am progressing slowly,” Williams said.

“Mentally, I still envision this person’s face. I still see a knife or I still have the mental effects, especially during the nighttime when I sleep, so it will have a long-lasting effect on me, especially the scar; that pretty much will last a lifetime. Every time I look in the mirror it is a constant reminder of the attack and what happened.”

Meanwhile, as many on social media as well as the opposition referred to Williams’ attack as a hate crime, he told Eyewitness News on Sunday that he ‘personally’ believes that it was a hate crime because he was not robbed.

“They did not take anything from me,” Williams said.

“They did not ask me for anything. I left with my wallet still in my back pocket and in fact when the young man stabbed me, my cell phone dropped and his father picked up my cell phone when I managed to escape and he gave me my cell phone and told me never to come back, so it is hard to comprehend it being anything other than a hate crime.”

Asked how he was feeling at this point about returning to the United States, Williams responded, “Before this, I had no fear of going anywhere in the United States but now this has kind of heightened my awareness of where I go because this could happen again.

“The United States is a very prejudice country. For many years it has been prejudice and there hasn’t really been any big improvement. And as for us Bahamians, we tend to go anywhere and we aren’t quite aware of all of the issues that they have, but now that this has happened we are now very concerned about where we go. So for me, I would only go to a place that is public. Any place that I am not familiar with, I would definitely stay away from,” Williams said.

Williams advised other Bahamians travelling to the US to stay away from isolated areas and only use public facilities [to use the bathroom] and not those of small businesses.

“If you are out in a public place or at any place that you are well aware of, then that is fine, but if you are in an isolated small business I would not advise anyone to go in there because if they [the owners] are having issues with Black Americans or any religious group, you could get caught up in that and you don’t want that,” he said.

Williams said that all he wants to do now is regain his strength so that he can return to work.

Interesting. I imagine that some personal injury lawyer in the U.S. will take this and make a hate crime out of it for a big settlement. Then all the restaurants/gas stations/convenience stores will close their bathrooms to anyone except a customer and I wouldn’t blame them. I take offense that Mr. Williams call the U.S. “prejudiced”. It is a concept that has been promoted by the media and those who want to play the race card. It is the one country in the world where people of all races have had the best chance of success. Are you going to tell us now that Nassau is a safer place to be?

Maybe he didnot get permission to use their restroom, in many establishments, the restroom is only for paying customers…I would like to hear their side of the story…