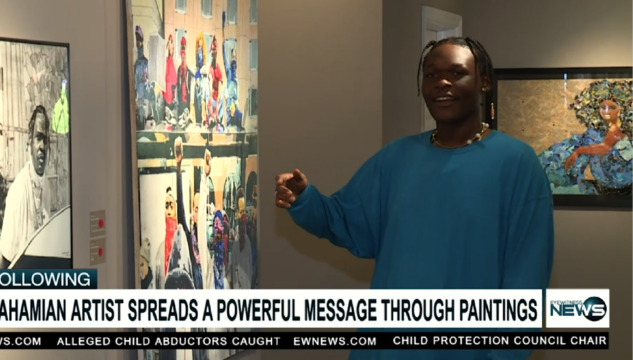 NASSAU, BAHAMAS – Keith Thompson, a 23-year-old artist has sparked a range of emotions when it comes to his paintings, but his present collection, entitled ‘FEAR’, hopes to expose art lovers to the realities of police brutality, gang violence and the many issues faced by persons living in the inner city.

“From a very early age, I was very focused on my academics but at the same time I associated myself with people who were a part of gangs and who did drugs, and those people at the time meant a lot to me. I had to make the decision to step away from them,” Thompson said.

Some of Thompson’s photos have depicted black men who have been dealt a hard blow from the communities they have grown up in. And according to Thompson, these blows may have included drugs, gang violence or matters related to how they are treated by the police.

The young artist said he wants persons viewing his art to know that  their talents can remove them from their existing environment.

“I remember showing them [black men] my art work on the hood of my car, and they couldn’t believe it” Thompson recalls, adding that his pieces have grabbed a person’s attention because the issues that he depicts in his paintings are relatively ‘unpopular’ in comparison to the ‘usual’ Bahamian art.

The Bahamian artist said he has sold more than 30 paintings within the last five years. He noted that while many Bahamian artists depict images of sun, sand and sea, his paintings are quite different.

Thompson said his paintings, which are firstly taken as stills, depict the misfortune of those who come from bad neighborhoods and are faced with more worst circumstances to overcome.

One picture drawn by Thompson includes him sitting in back of a police car, while the police stares down the eye of the camera.

Another picture includes a number of persons who have divided themselves with the gang colors of the Crips and Bloods, two widely known gangs in Los Angeles.

But since becoming heavily focused on his work, Thompson said he has found it easier to remain in isolation,  disconnecting himself from all social distractions.