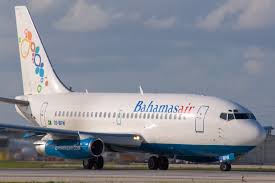 NASSAU, BAHAMAS — Bahamasair has leased a B737-700 aircraft for $110,000 on average per month, a measure that staves off a $2.5 million heavy maintenance check on an “aged aircraft”.

The “next generation” aircraft touched down at Lynden Pindling International Airport (LPIA) today.

The length of the lease and its total value remains unclear.

The lease agreement came about following 14 months of discussions.

“When we became aware that the aircraft might be available, Bahamasair recognized that it could not afford to purchase it and so the lease option was explored,” Bahamasair Managing Director Tracy Cooper said.

He said the airline was not increasing its fleet, but replacing an aged aircraft with one that will provide “better economics and savings”.

According to Cooper, the B737-700 aircraft provides greater flexibility in range and capacity — with 90 minutes more flying time and an additional 18 seats respectively — while having a lower hourly operational cost.

He said: “Having this aircraft provides the airline a greater means of catering to our tourism product by offering a more enhanced charter service for the local hotels.”

The leased aircraft replaces a B737-500 model, which has been scheduled for a “heavy maintenance check”.

If carried out, the estimated cost to the airline would be $2.5 million.

The price tag was a critical factor in the decision to replace the aircraft with the leased one.

“The airline began preparation for this replacement in August 2019 well before the development of COVID-19,” read the statement.

Bahamasair will continue to operate a fleet of nine aircraft, the company said.

This includes five ATRs props and four B737 jets.

Two of the remaining B737-500 models are nearing the end of their “useful and economic life” at 27 years old, according to the company, which said over the next two to three years, efforts will be made to replace the aircraft.

Major hotels and beaches were expected to reopen today to mark The Bahamas’ soft reopening otherwise known as ‘VIP’ (vacation in place).

However, beaches remain closed on New Providence and Abaco, and the two major hotels on the island have yet to advise of reopening dates.

New travel and testing protocols are expected to be introduced on November 1, namely the discontinuation of travel quarantine after obtaining a negative RT PCR COVID-19 test and health visa.

It remains to be seen whether the national flag carrier, as the preferred airline for residents and Bahamians traveling to Florida, will benefit from the revised measures.