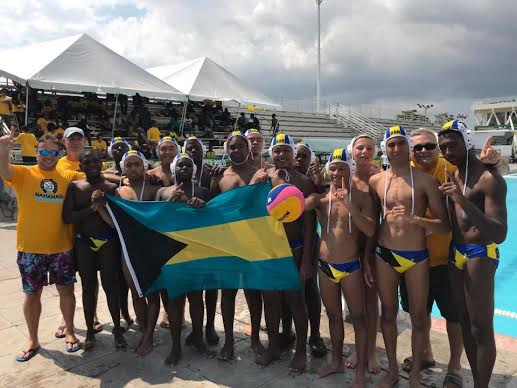 The Bahamas went a perfect 3-for-3 this weekend at the 2018 Caribbean Free Trade Association (CARIFTA) Water Polo Championships in Kingston, Jamaica.

Team Bahamas built on a solid showing in the early rounds and completely dominated the final round matchups in each division.

In under-19 boys action, The Bahamas avenged its CARIFTA final loss to Jamaica on Sunday, knocking off the home team 13-10 to secure the gold medal.

Gabriel Sastre and Saequan Miller had four goals each in the win, while Nicholas Wallace-Whitfield added three, and Loron Bain and Alex Turnquest added a goal apiece.

In the Under-16 division, The Bahamas cruised to an easy 17-3 win over Jamaica. Sastre was once again the top scorer for the Bahamas, finishing the under-16 game with six goals. Gabriel Encinar and Thomas Illing scored three Wallace-Whitfield had two, and Damian Gomez, Jelani Grant and Alex Turnquest each registered one goal.

And in the under-14 division, team Bahamas completed the tournament sweep, easily getting past Jamaica 16-2.

Over the past two years The Bahamas has emerged as a dominant force in the region.

The boys-under 15 team went on to win gold, while the other two teams secured top five finishes.

Prior to this year’s championships, team Bahamas competed in the South Florida International Water Polo Tournament (SFIWP). After a tough weekend, the team finished the tournament 12th out of 16 teams.