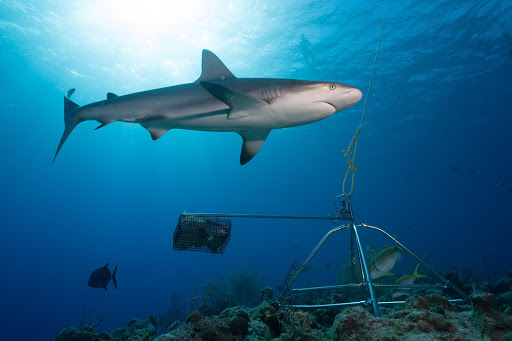 NASSAU, BAHAMAS — Global FinPrint, the largest ever shark population survey of its kind, has commended The Bahamas as a “world-leader” in shark conservation efforts.

Shark species around the world have suffered large declines for decades due to overfishing and other human pressures, with reef sharks particularly impacted because of their habitat’s proximity to large human population centers.

Not so in The Bahamas, where populations of reef sharks and several other species have remained stable for decades due to the country’s long history of forward-thinking conservation policies, according to the researchers behind the major international study.

Global FinPrint said the incredible conservation success of The Bahamas is due in large part to the hard work and foresight of local researchers, as well as official institutions such as the Bahamas National Trust and the Bahamas Department of Marine Resources.

The seeds for Global FinPrint were planted in part on research started as a 2011 partnership between the Bahamas-based Cape Eleuthera Institute (CEI), New York-based Stony Brook University and the Moore Bahamas Foundation, founded by conservation philanthropist Louis Bacon, to conduct shark tagging and video surveys with the aim of supporting healthy shark populations in The Bahamas.

It grew to become part of an international, multi-institutional research program led by Florida International University, with partners that have included several other Bahamian research institutions, as well as the Anderson Cabot Center for Ocean Life at the New England Aquarium, photographer-videographer Andy Mann and Google Expeditions.

The team recently published key findings in Nature, and documents just how much The Bahamas has benefited from shark conservation initiatives relative to other countries around the world. No commercial shark fisheries were ever allowed to develop within its borders, and when longline fishery started to expand in the early 1990s, this was quickly shut down by a ban on longline gear in 1993. Protections were reinforced by the designation of the Bahamas Shark Sanctuary in 2011, which banned the fishing, possession and trade of sharks and shark parts. The Bahamas was one of the first countries in the world to designate the entirety of its waters a sanctuary for these iconic marine species.

Global FinPrint deployed video cameras with bait attached and surveyed 371 reefs in 58 nations, including 16 reefs in The Bahamas from Bimini to San Salvador. They found that, in terms of reef shark abundance, The Bahamas was the best performing nation relative to regional expectations in the wider Caribbean.

CEI Director Dr Nick Higgs said, “The Shark Research and Conservation program at the Cape Eleuthera Institute has been studying sharks in The Bahamas for over 15 years and we are proud to be a part of this landmark study, showing that The Bahamas has some of the healthiest shark populations in the world.

“The contrast with local neighbors like the Dominican Republic is striking, where reef sharks were virtually absent. And we know that it’s not because of any recent spike in shark numbers here. Another recent study by the CEI shark research teams shows that local shark populations have remained stable over the last three decades, thanks to the foresight of The Bahamas government and the Bahamas National Trust in progressing effective management of our seas over this time.”

The Bahamas attracts divers, wildlife photographers, filmmakers and scientists who wish to interact with and study its healthy shark populations. Another study by CEI determined these ecotourists bring in roughly $114 million USD to the Bahamian economy every year, who spend much of their money in economically depressed areas like the Family Islands.

Lead Scientist of Global FinPrint from Florida International University Demian Chapman said, “The Bahamas is an important regional refuge for reef-associated sharks. By refusing to allow a shark fishery to develop and prohibiting destructive fishing practices such as longlines, The Bahamas is clearly a world leader in forward-thinking, economically and environmentally sustainable shark conservation, and serves as an example of how nations in the wider Caribbean can both conserve sharks and benefit from healthy shark populations.”