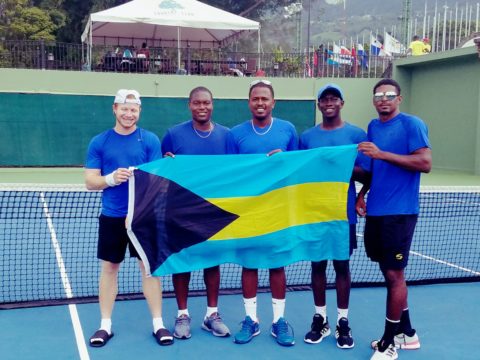 The Bahamas picked up its first win of the 2019 Davis Cup Tournament in Costa Rica yesterday against Antigua and Barbuda.

Phillip Major won his singles opener over Shakir Elvin in straight sets (6-4, 6-3), allowing just one game in the first set.

In the rubber No. 2 match, Baker Newman fell to Jody Mangiley 7-5, 7-5, which set up a doubles tie-breaker.

In that match, coach Marvin Rolle teamed up with Newman and Phillip for The Bahamas. The pair took the first set 6-1 and followed that up with a 6-3 set to secure the win.

“It was great to come out and get a win on opening day,” Newman said following the match. “We had a really good showing gin the doubles and singles against a good team. We look to build on what we did and carry it forward as we represent The Bahamas.”

The team has a rest day tomorrow and will face host country Costa Rica on Wednesday. The two countries faced each other in the playoffs match last year. Justin Lunn and Dontae Armbrister are the other two team members.