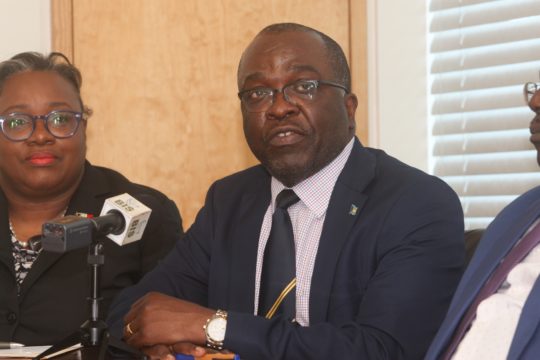 The announcement was made on April 11, 2019 at the Ministry of Transport and Local Government.

Minister of Transport and Local Government, Renward Wells said that he was pleased to make the announcement.

“International maritime administration is a field in which The Bahamas continues to excel on a global scale,” said Wells. “The appointment of Captain Dwain Hutchinson as the Managing Director and CEO of the BMA is another milestone in maritime excellence for The Bahamas.”

Wells said that Captain Hutchinson brings to the post an unusually ‘broad and deep’ list of qualifications and accomplishments.

“He has now assumed a key leadership position in the international maritime regulatory field,” he said. “I congratulate him, and the entire BMA team, on behalf of the Government of The Bahamas.”

He said that the BMA administers one of the major ship registries in the world, overseeing some of the world’s highest profile vessels. “The maritime sector is a major contributor to the economy of The Bahamas and plays a major role in our expansive vision and plan for The Bahamas’ Blue Economy growth. We highlight the BMA’s initiatives for employment in the environment and maritime legislative and regulatory fields.”

The Minister said that as it pertains to employment, the BMA is partnering in support of voluntary initiatives with ship owners to help create on-going job opportunities for Bahamians on board ships globally. In environment, he said that the BMA is engaged in the international regulation of ship-based ballast-water treatment systems, and air emissions from ships, in further support the country’s unique marine environment. In the legislative and regulatory fields, he noted that the BMA is also engaged in the formulation of a new Merchant Shipping Act that would keep the country in the forefront of such legislation worldwide.

Captain Hutchinson stated that he was grateful for the opportunity and looked forward to serving the country to the best of his ability.

“I wish to thank the Government and Bahamian people for this opportunity to serve the country in this capacity,” he said.

Captain Hutchinson completed his maritime studies at Glasgow College of Nautical Studies in Scotland, where he attained his UK Master Mariner (Unlimited) STCW certificate. He served at sea for 14 years as a deck officer on a variety of ships before joining The Bahamas Maritime Authority in l996. At the BMA, he has served in various senior executive capacities.

This article is written by Betty Vedrine – Bahamas Information Services.