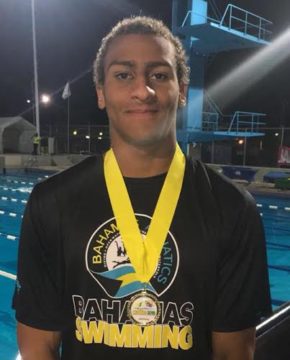 After three days of intense competition in Kingston, Jamaica, team Bahamas holds a comfortable lead over the rest of the field at the 2018 Caribbean Free Trade Agreement (CARIFTA) Swimming Championships.

The Bahamas currently has a total of 543.5 points, more than 100 points ahead of second place Jamaica with 395 points.

Guadeloupe is currently in third with 375, followed by Trinidad and Tobago with 356 and the Cayman Islands with 291. Barbados sits in sixth with 249, Martinique is seventh with 221 and Bermuda rounds out the field with 215.5.

Izaak Bastian led the charge for team Bahamas on day three. Bastian broke the CARIFTA meet record in the 15-17 boys 50-meter (m) breaststroke, touching the wall in 28.69 seconds. The Bahamas found success in the event across all age divisions, coming up with six medals in the 50 breast.

Bastian also broke the CARIFTA record and the Bahamas senior national record in the 200m breaststroke on opening night with a time of 2:17.78, easily surpassing the previous CARIFTA record of 2:20.18 set by Jordy Groters of Aruba in 2014.

The senior national record was held by Olympian Dustin Tynes at 2:18.13. The Youth Olympic Games A standard is 2:18.10

Bastian picked up his third individual gold on Sunday in the 50m butterfly, another event that team Bahamas excelled in as a whole.

Team Bahamas has been able to finish with double-digit medal counts through all three days of competition so far.

CARIFTA swimming action continues today at the National Aquatic Centre in Jamaica. It’s almost impossible for any team to catch up with team Bahamas with just five events left, which means it’s almost certain that The Bahamas will capture its second consecutive CARIFTA swimming title, and it’s fourth in five years.