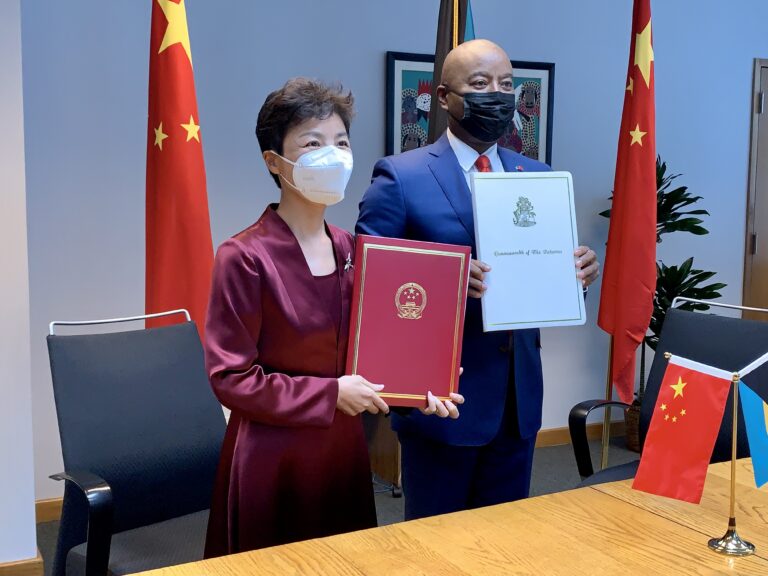 Chinese Ambassador to The Bahamas Dai Qingli (left) and Minister of Foreign Affairs Darren Henfield at the Ministry of Foreign Affairs on Wednesday, July 7, 2021, during a signing ceremony for a $12 million economic and technical agreement between the People’s Republic of China and The Bahamas. (BIS PHOTO/KRISTAAN INGRAHAM)

NASSAU, BAHAMAS — The government signed a $12 million economic and technical agreement with the People’s Republic of China during a signing ceremony held at the Ministry of Foreign Affairs on Wednesday, July 7, 2021.

Minister of Foreign Affairs Darren Henfield said he was pleased to have signed the bilateral agreement on behalf of the Bahamas government.

“This marks yet another milestone in the enduring friendship between China and The Bahamas since the establishment of diplomatic relations between our two countries in l997,” said Henfield. “In fact, this is one of similar agreements that have been signed between China and The Bahamas since l997. This agreement represents a grant of 80 million RMB yuan, the equivalent of some $12 million in today’s market. During 2019, we signed an agreement for a similar amount.”

Ambassador of China Dai Qingli said it is a great opportunity for both countries. She said that the agreement came at an opportune time for the two countries, which, to date, have enjoyed 24 years of diplomatic relations.

“This agreement will give The Bahamas a further boost to assist in improving infrastructure in the country, including continued work on the national stadium, docks, roads and bridges,” said Dai.

The Chinese government has also given assistance to The Bahamas in the aftermath of Hurricane Dorian and has continued to provide medical support and supplies during the COVID-19 pandemic.