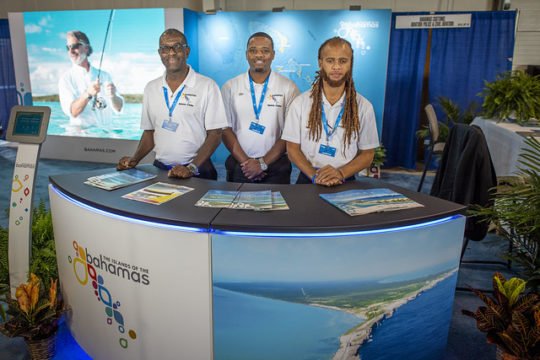 Members of the Bahamas Civil Aviation Authority booth are ready for visitors during the 2019 EAA AirVenture Oshkosh July 23, 2019, in Oshkosh, Wisconsin. rThe International Federal Partnership (IFP) returns to the week-long airshow for the 26th consecutive appearance this year.rThe IFP is composed of Canadian, Bahamian and American government agencies and departments that choose to benefit from a joint, cooperative relationship in outreach and education of the general aviation community. Over the last 25 years, the International Federal Partnership has included as many as 17 agencies.rUSDA Photo by Preston Keres

Now in its 50thyear, the EAA AirVenture Show is the largest aviation show in the world, and each year attracts in excess of 500,000 pilots, aviation enthusiasts and media and industry professionals from around the world, as well as over 10,000 airplanes ranging from home-builts to war birds.

“The Bahamas receives an injection of a substantial amount of dollars into its economy from general aviation business derived from this show, which is especially beneficial for our Family Islands, said Captain Rolle. “Just two days into this year’s show, and we have already registered some 300 private pilots who attended our seminars and are interested in flying to The Bahamas.  We have also received an unprecedented number of enquiries and expressions of interest from visitors and other private pilots visiting our booth,” he added.

In 2018, The Bahamas reached a historic milestone in general aviation, and welcomed more than 122,000 private pilots to its islands, up from the previous year’s performance of 92,000 private pilots, and generated in excess of $387 million dollars into its economy.  The Bahamas is also the number one ranked destination in the Caribbean and Eastern Seaboard for general aviators, #bahamasflying, #bahamasflyaway, #osh19.

The Bahamas is one of three nations, including the United States of America and Canada that are members of the International Federal Partnership (IFP), consisting of federal government agencies committed to education, improvement and protection in aviation.