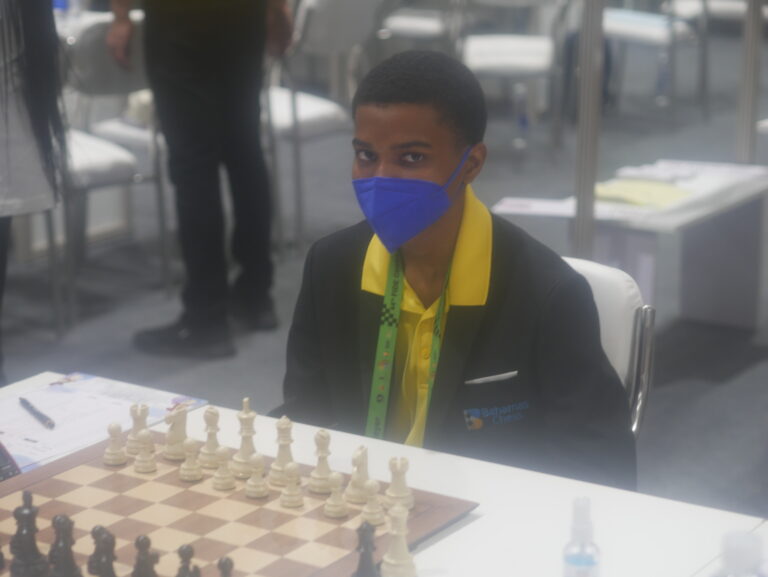 NASSAU, BAHAMAS – The Bahamas Open Team trumped Seychelles in Round 6 winning three out of
four games.

CM Kendrick Knowles, WCM Polina Kerelina, and Noah Albury all secured a win for the Open Team. The Bahamas Women’s Team put up a valiant fight against Sudan but only WCM Daijah Johnson was able to secure a win in Round 6.

“This Olympiad experience has been a challenging one but has also been a fun and learning experience,” said Albury, Open Team.

He continued: “Whether I win or lose I get to grow from the experience. My goal for the rest of the tournament is to win more games.”

The 44th FIDE Chess Olympiad is an over-the-board team event. National Chess Federations compete
in classical games for gold medals, trophies, and the title of strongest chess nation in the world. The
event consists of an 11-round Swiss tournament; each player from a national team plays against
another player from the opposing national team.

“After taking a two-year hiatus from chess due to Covid, and adjusting to university life, being offered the opportunity to participate in the 44th Chess Olympiad in Chennai, India was a whirlwind of emotions for me,” said Daijah Johnson, Women’s Team.

She continued: “After being gone for so long, my first two rounds started off a bit shaky, however, my game returned to what it once was for the preceding three rounds. After 6 rounds in all and having played 5 rounds, I won 3 games and lost 2 of them. My final win out of my three-win streak was honestly one of my favorites.

“In my opinion, I played a good game from start to finish, and I truly felt like I was tapping back into the strength that I once had.”

Yesterday served as a well-deserved rest day after six straight days of play. Tournament play
resumes today, and Round 6 will see The Bahamas Open Team up against Barbados.

The Barbados Team comprises a highly rated International Master (IM) and FIDE Master (FM). The Bahamas Women’s Team will face off against Guam. The Bahamas has a total of 17.5 points.