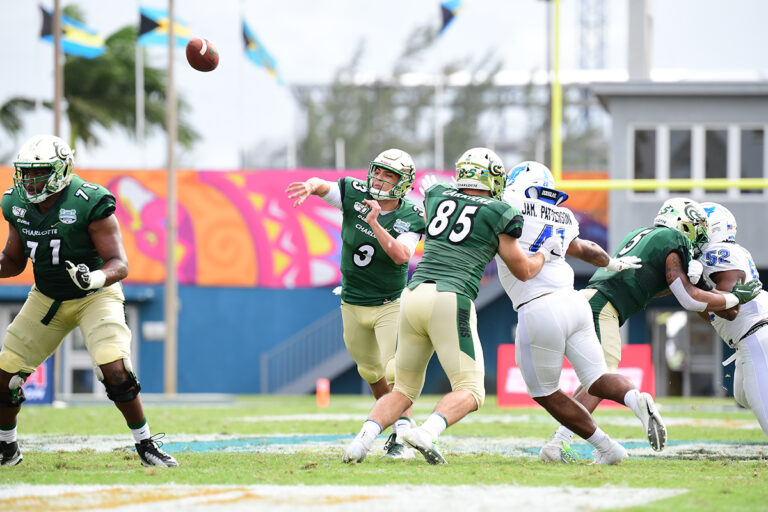 NASSAU, BAHAMAS- After a one-year hiatus due to the presence of the COVID-19 pandemic, the longest-running international bowl game, the Bahamas Bowl, returns, set for Friday December 17 at the Thomas A. Robinson National Stadium.

The event was officially launched on Wednesday during a press conference at the Thomas A. Robinson Stadium.

This will be the seventh edition of the game that pits a Conference USA (C-USA) team against a counterpart from the Mid-American Conference (MAC). It will be the second time the Bahamas Bowl kicks off the NCAA (National Collegiate Athletic Association) bowl season.

Both conferences were represented at the press conference, and their representatives said their teams are ready to make the trip to The Bahamas to compete for the Prime Minister’s Trophy.

“We have a very large conference, in over 10 states with 14 teams, and they fight to come to The Bahamas to play,” said C-USA Deputy Commissioner Brian Mackin. “They want to be in this bowl game, they really do. C-USA is committed to coming down here and making this the best bowl possible. We are excited, we will come in droves and we will put economic development back on the table.”

MAC Commissioner Dr. Jon Steinbrecher said: Thank you for opening the islands for us and we are so thrilled to be here. We had our football media day several weeks ago in Detroit and all the student-athletes we had there had their picture next to the Bahamas Bowl poster. They’re all ready to come here.”

The conferences are tied at three victories apiece with each year wins alternating between the two. This will be the tiebreaker year.

The game will be televised live on ESPN. ESPN Vice President of Events Clint Overby said that they want to help recover sports which took a big hit during the pandemic.

“On behalf of ESPN and the Walt Disney company, we’re excited to be back and we’re excited to be in the business of college football. Sports has obviously taken a big hit during the pandemic but we want to play a role in that recovery with college football, college basketball and the entirety of the sports enterprise. We believe that staging a game here in The Bahamas is a part of that recovery,” Overby said.

Bahamas Bowl Executive Director Richard Giannini is looking forward to having the game this year.

“We are thrilled to return to the bowl line-up and to be the opening game of bowl season this year. The bowl has been a fixture on The Bahamas’ sporting calendar since 2014, and the game has provided tremendous competition for our partner conferences at Conference USA and the Mid-American Conference. We have a fun gameday atmosphere for our fans who attend the bowl, and it is a yearly showcase of the beauty of The Bahamas on ESPN. We know that the 2021 bowl game will remind everyone why ‘Bowl Games are Better in The Bahamas’,” Giannini said.

Welcoming the bowl game back to The Bahamas was Minister of Tourism Dionisio D’Aguilar. He said the game represents hope after a tough 16 months.

“After all we’ve endured these past 16 months, a wilderness of sorts across every segment of our tourism product, we are with great excitement looking forward to this year’s bowl game,” he said, “Needless to say, we have all been deeply impacted by this terrible pandemic and we are still reeling from its effects, but in life there is always hope, and the return of the Bahamas Bowl represents just that – hope for our partners, hope for the players, their families and friends, hope for our visitors and hope for Bahamians.”

D’Aguilar said The Bahamas is becoming an international sports event mecca in the Caribbean and that the Bahamas Bowl played a role in that.

Winning the last Bahamas Bowl game back in 2019 was the University at Buffalo Bulls. They defeated the University of Carolina at Charlotte 49ers, 31-19, to win their first bowl game in school history.

The bowl game showcases quality players as 27 of its alumni have been drafted into the National Football League (NFL). A total of 41 alumni has played in at least one NFL regular season game. The highest selected player was Western Michigan’s wide receiver Corey Davis who was the fifth overall selection in the 2017 NFL Draft.