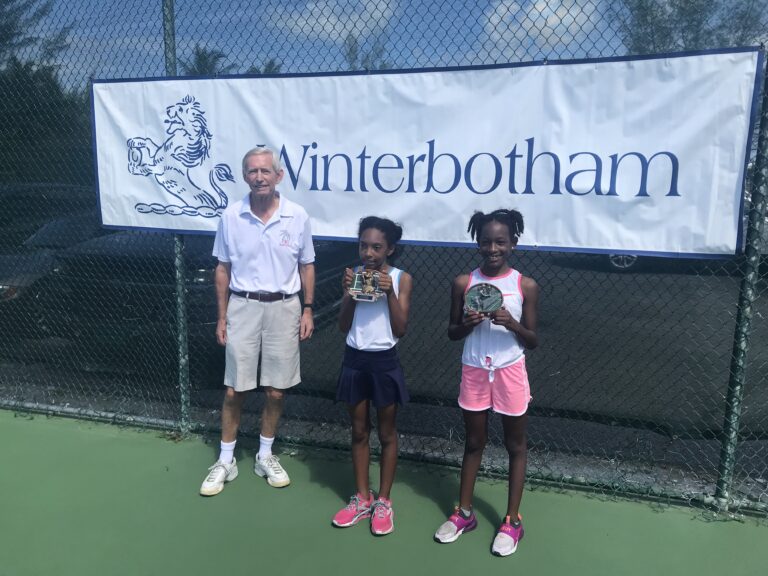 The series was designed to give young under 10’s and under 12’s a start in competitive tennis in a friendly and enjoyable way, and has been dubbed a “great success”.

Over 30 juniors competed in the competition, according to a press release.

“In order to give maximum interest to players, they did not have a knockout competition but on Saturday played in Round Robin groups by age and sex,” the release read.

“On Sunday, the winners of groups played another round robin against each other as do the other opposite numbers from each Saturday group. That way on Sunday most players are competing with others of a similar level and all players are guaranteed several matches.”

The IC’s motto “hands across the net, friendship across the ocean” encourages good sportsmanship among those competing. The club asks parents and coaches not to get involved in the matches but to be appreciative and supportive of all players.

An important part of the event is the “Sportsmanship Awards” given to players who demonstrated a good attitude on and off court. Ayai Bethel, a first time competitor, won the boys competition. Jasleen Salkey won the girls award.

“Unlike most of the competitors who were competing for the first time, both of these players competed in the younger age group pre-COVID break. It was good to see how they have progressed from the earlier series. In the 10’s age group all the competitors were new to the Winterbotham IC Junior Series and the winners were Cory Conyers for the boys and Victoria Sandi-Aguilar for the girls.”

The main IC organisers were Tara and Neil Mactaggart and Mickey Williams, together with Tournament Referee Everette Bannister.

“The IC thanks the coaches from many areas of New Providence, Freeport and Artie Johnson from Eleuthera who have developed these young players and brought them in to this competition,” the statement continued.

“It was especially noted what good attitudes and friendliness the young players exhibited, which is something the coaches have built in to their development programs and are to be commended for.”

Kit Spencer, President of The Bahamas IC, said the International Tennis Clubs (IC) are made up of 40 countries with players who have played to a high standard such as the Davis Cup and want to keep the international camaraderie and competition going as they get older.

“In addition to older age events for its members, the worldwide IC organisation has a philanthropic arm that works to develop tennis and personal development for kids in many poor areas of the world,” the statement read.

“In addition it runs a number of junior competitions such as The IC Rod Laver Junior Challenge, which is a team competition for two boys and two girls 16 & under who play as one team. This is held on every continent with the winning teams going to The Worldwide Finals the next year. The Bahamas will host the North American Continent Event later this year.”

The statement read: “The last three Worldwide Finals have been held at Wimbledon, Monte Carlo and Tokyo – an outstanding experience for the juniors at world class venues. IC member and “Tennis Great” Rod Laver has lent his name to this competition. The IC sponsors the juniors in these event at no expense to them. In this respect, Winterbotham Trust is thanked for its continued support of IC Bahamas activities that helps make such things possible.”