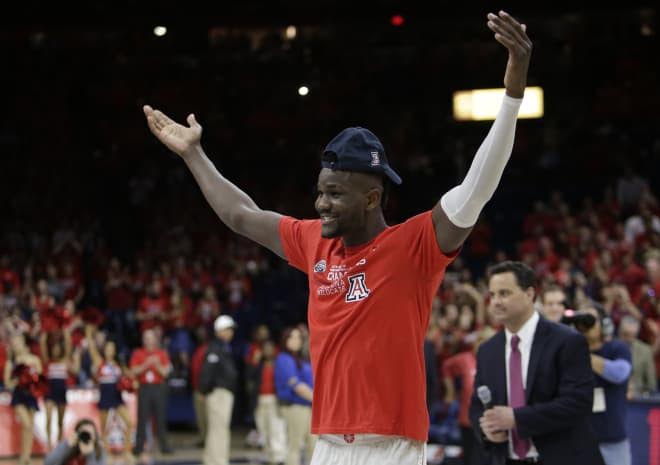 The awards continue to roll in for University of Arizona freshman Deandre Ayton, who one day after being named Pac-12 Player of the Year, was named to the All-Pac-12 Conference men’s basketball team yesterday.

“He’s a once in a generation player,” Wildcats coach, Sean Miller, said about the 7’1” center following the announcement.

“I doubt if I’ll coach anyone like him again.”

Ayton shot just over 60 per cent from the field over the course of the regular season and was effective on the defensive end of the floor as well, finishing with 59 blocked shots to tie for seventh-most in conference history as a freshman.

Ayton has 21 double-doubles this season, two off the single-season conference record, held by UCLA’s Kevin Love.

“This is a blessing,” Ayton said. “I work really hard on my game and I try to be a great person on and off the court. I try to be a professional.

“I try not to engage in any foolishness and just put the team first, because it’s us against the world. With all this adversity we overcame, we just always want to get out and play strong for our fans.”

Behind Ayton, the Wildcats were able to bounce back from a turbulent trip to The Bahamas and win its fifth Pac-12 title in six years.

Ayton is the third player under coach Miller to be named to be named Pac-12 Player of the Year, joining Nick Johnson (2014) and Derrick Williams (2011).

Arizona will now prepare to make a Pac-12 Tournament run, beginning on Thursday. Arizona will play the winner of Arizona State vs. Colorado.

“It’s all business now. No more fun and games,” Ayton said. “We have to get back in the lab, focus on what we have to do and focus on getting better.”

Ayton is averaging 19.9 points and 11.4 rebounds on the season and shooting 61 percent from the floor.