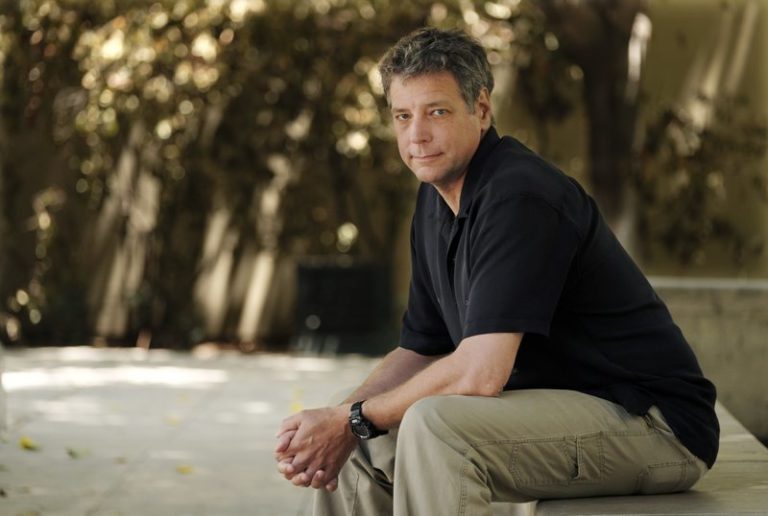 In this June 20, 2018 photo, Michael Scott Moore, author of “The Desert and the Sea: 977 Days Captive on the Somali Pirate Coast,” poses for a portrait at Los Angeles Public Library in Los Angeles. Six and a half years after his abduction and nearly four years after his release following payment of a $1.6 million ransom, Moore has completed a page-turning thriller of a book describing the time he spent in gruesome captivity. The book will be released on July 24. (AP Photo/Chris Pizzello)

LOS ANGELES (AP) — Michael Scott Moore is walking a bit gingerly these days, but it has nothing to do with the 2½ years he spent imprisoned by Somali pirates, the beatings he suffered, his time spent in chains or the lousy food that caused him to lose 40 pounds.

“I got thumped by a wave surfing off Manhattan Beach the other day,” the author of “The Desert and the Sea: 977 days Captive on the Somali Pirate Coast” says with a sheepish grin. “I’ve got a cracked rib.”

Otherwise, Moore, freed by his pirate captors in 2014 after his mother raised a $1.6 million ransom, looks fine. He’s dressed casually in a dark blue shirt and jeans as he sits down in the shade of the century-old art-deco building that houses Los Angeles’ downtown library to talk about his latest book.

“The Desert and the Sea” goes on sale Tuesday, and its 49-year-old author is about to embark on a cross-country tour of readings and signings.

The page-turning thriller, published by Harper Collins, takes readers on a relentless journey as Moore reveals the squalid living conditions that nearly killed him, the beatings he endured and the thoughts of suicide he weighed, along with other thoughts of grabbing one of his captor’s machine guns (they were careless about leaving them lying around) and seeing how many of them he could kill before they killed him.

“I don’t know,” he says with a smile when asked how he survived it all.

After several seconds of quiet contemplation, he adds that a combination of giving up any immediate hope of freedom and living in the moment helped. So did maintaining a sense of humor while trapped in a very unfunny situation. Thus, the book contains several darkly comic moments.

Like the one when Moore hid the keys to the chains, the pirates kept him in after he tried to escape by leaping from an old fishing vessel and attempting to swim to shore. They never could find them and had to buy a new set, something that delighted their captive.

Or the time one of the friendlier pirates, knowing Moore holds dual U.S.-German citizenship, woke him one morning to say excitedly that Germany, that year’s World Cup winner, defeated Brazil 7-1 in the semifinal game. Moore dismissed the news as “more pirate bull—-,” replying that no team scores seven goals in a soccer game. Then he turned on the radio and learned it was true.

Moore first thought of writing a book about modern-day piracy when he came across examples of it in coastal African and southeast Asian nations he visited while seeking out some of the world’s best-surfing spots for a 2010 book. “Sweetness and Blood,” documenting how a loose-knit band of hippies, star-struck wanderers and U.S. military personnel helped turn an ancient Hawaiian sport into an international pop-culture phenomenon, has been hailed as arguably the best historical account of modern-day surfing.

His plans to report on piracy weren’t sealed, however, until he covered the trial of 10 pirates captured after abducting a German cargo ship off Somalia in 2010. Their two-year trial, which Moore covered for the publication Spiegel Online, marked the first case of piracy prosecuted in Germany in nearly 400 years.

“I really wanted to write a book that had material that I hadn’t seen. On pirates,” he says now. “And it became an obsession.”

By the time he arrived in Somalia in January 2012, piracy had become a cottage industry for a nation plunged into poverty and lawlessness by years of civil unrest. Young men unable to find other work sailed the high seas in small skiffs looking for people to kidnap and hold for multimillion-dollar ransoms.

Moore says he knew going to Somalia was dangerous, but he thought he’d taken all necessary precautions. A “fixer” with clan connections arranged the trip in which he was accompanied by a large contingent of machine-gun-toting guards.

But a pirate leader Moore interviewed betrayed him, paying off most of his security team. Moore was captured on a dusty desert road by pirates who demanded a $20 million ransom.

As his mother spent years negotiating the price and raising money from family and friends, Moore’s plight went largely unreported. His employer, Der Spiegel, asked other news organizations to withhold the story, fearing publicity would drive up the price. Almost all, including The Associated Press, complied.

“Honestly, I don’t know if it was better or worse to keep it quiet,” he says now.

Tall and trim with graying hair, Moore says he has fully recovered physically from his ordeal, although it took more than a year. He laughs when he recalls that several Asian fishermen he was held captive with remarked, “Michael, you got fat,” when they saw him during an emotional 2016 reunion.

He still struggles with some emotional scars and takes part in a therapy called Eye Movement Desensitization and Reprocessing, which involves concentrating on what happened to you while focusing the eyes.

“I don’t know if it’s trendy or cutting edge,” he jokes.

“At times, I think he still has very much trouble sleeping, although he says he doesn’t have nightmares,” his 78-year-old mother, Marlis Saunders, says in a phone interview from the Redondo Beach home where her only child grew up and became an avid surfer.

Another ex-hostage, former Associated Press correspondent Terry Anderson, says it’s unlikely anyone gets completely over such an ordeal.

“That kind of an experience does damage to you that takes a long time to compensate for,” said Anderson, who was AP’s chief Middle East correspondent when he was abducted by Islamic militants in Lebanon in 1985 and held for nearly seven years. “You don’t forget it.”

Anderson, 70, says he’s glad to hear Moore is getting counseling, adding he underwent it himself but still struggled to accept how emotionally damaging his experience was.

For now, Moore is busy with his book tour and working on a feature story about three men recently convicted of plotting to blow up a Kansas apartment building housing Somali refugees.

After that he’d like to get back to some of the travel writing that took him to many fascinating parts of the world when he was researching his surfing book.

Then he laughs as he quickly adds, “It doesn’t have to be dangerous travel.”

This article was written by JOHN ROGERS, Associated Press writer.