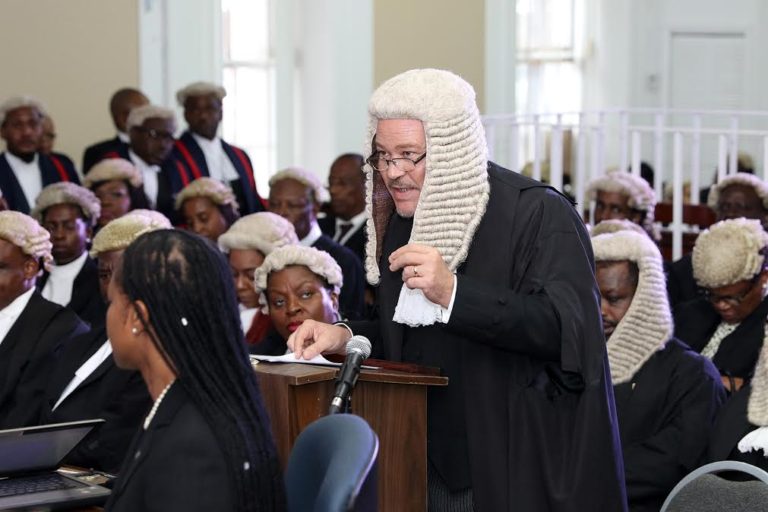 Attorney General and Minister of Legal Affairs, Senator the Hon. Carl Bethel is pictured speaking at the Supreme Court at Opening of the Legal Year ceremonies. (BIS Photo/Patrick Hanna)
NASSAU, The Bahamas – Attorney General and Minister of Legal Affairs, Senator the Hon. Carl Bethel dubbed the 2017 calendar year, one of ‘transitions and transformations’ and reviewed major legislative initiatives intended to improve the administration of justice, the rule of law and to create transparency, and accountability in Government as he addressed the ceremony to mark the Opening of the Legal Year.
The Legal Year was officially opened by Acting Chief Justice Stephen Isaacs, Thursday, January 11, 2018 at the Supreme Court and attended by justices, magistrates and other members of the legal profession.
The Attorney General highlighted the Constitutional Amendment Bill, which was has been enacted and for which preparations are in order for gazetting. The purpose of the Bill is to create an independent office of the Director of Public Prosecutions (DPP) and devolve the prosecutorial powers of the State, previously under the portfolio of the Attorney General, to the DPP.
He said the key achievement of the constitutional amendment is that, “the power of the AG to institute and undertake criminal proceedings, as well as to take over and discontinue such proceedings, will now be transferred to an independent public officer, with security of tenure equivalent to that of a judge. Prosecutions will now be commenced in the name of the DPP.”
The Attorney General noted the significance of the change in the framing of charges and described it as a “symbolic coming of age” in the legal development of The Bahamas.
“For the first time in history, prosecutions will not be commenced in the name of the Queen, or the English monarch, as Constitutional Head of State, but in the name of a public legal officer of an independent Bahamas, representing the people.”
He addressed the amendments to the International Tax Cooperation (Amendment) Act and the Automatic Exchange of Financial Account Information (Amendment) Act, which are already in force. Senator Bethel said the initiatives were undertaken to “defend” and further “enhance” the reputation of The Bahamas as a financial services centre and to ensure that The Bahamas remains current with international standards and best practices.
He said the legislation paved the way for The Bahamas to sign on to the Multilateral Convention on Mutual Administrative Assistance in Tax Matters, which The Bahamas signed on to in December 2017, becoming the 116th jurisdiction to join the world’s leading instrument for transparency in taxation administration and combating cross-border tax evasion.
The Integrity Commission Bill and the Ombudsman Bill, designed to “deepen” democratic governance in accordance with international standards and promote the rule of law, were tabled in 2017 and are expected to be debated and implemented this year.
Despite push-back expected particularly in regard to the Integrity Commission Bill being “intrusive” the Attorney General said the Government will continue the process of engaging widespread public consultation on major legislative initiatives to obtain feedback from the public and stakeholders which will used to inform the final product.
“What must be made clear to all, though, is our resolute determination to enhance the standards of conduct in public life and to stamp out the blight of corruption, or perhaps, the perception of corruption in high places,” said Senator Bethel.