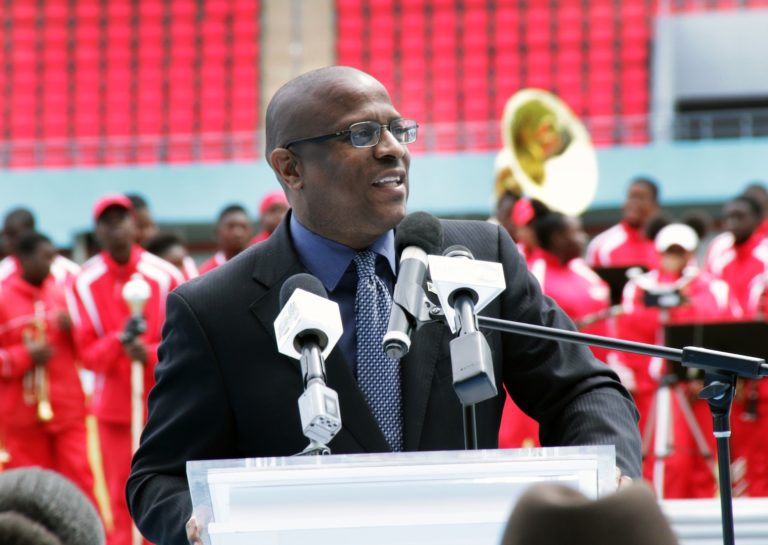 Hundreds of the country’s premier high school track and field athletes have converged at the Thomas A. Robinson National Stadium for the Government Secondary Schools Sports Association (GSSSA) Championships, with more than just school pride on the brain.

Unlike the Bahamas Association of Independent Secondary Schools (BAISS) Championships, the GSSSA nationals focus on individual performances rather than group scores.

Athletes are competing with the hopes of qualifying to compete for The Bahamas at the upcoming CARIFTA Track and Field Championships in Curacao, set for March 30 – April 2.

CARIFTA qualifiers highlighted the first two days of competition. On Thursday, both of the athletes that secured CARIFTA spots came from Saint Augustine’s College (SAC), and both qualified in field events.

On Friday, Adrian Curry (SAC) won the under-20 boys 100m in 10.60 seconds, dipping way below the qualifying mark of 10.70 seconds, however he previously qualified at the BAISS championships. And in the under-17 girls 100, Jaida Knowles (SAC) took gold in a qualifying time of 11.96 seconds.

More than 60 schools from around The Bahamas are competing in the high school nationals this weekend. The meet continues today at the national stadium, starting at 11 a.m.

Minister of Youth, Sports and Culture, Michael Pintard, congratulated the event’s participants for being invited to compete in the annual High School Nationals.

Pintard was one of the keynote speakers of the meet’s opening ceremony, along with event organizer Mike Sands.

“I commend the discipline it takes to be a high school athlete and I also want you to make the most of this opportunity,” Pintard said to the junior athletes.

“I consider you guys to be the country’s next elite athletes. The next Buddy Hield’s, the next Shaunae Miller-Uibo, or even the next Steven Gardiner. Even those that won’t have the opportunity to be professional athletes will more than likely get a college education at a university. So, in that regard, we need to ensure that we have well balanced athletes, which means that the grades need to be intact. You can be as talented as you want to be, but if those grades aren’t intact, you will still find some difficulty getting to the next level. So, remain disciplined, refrain from doing things that could jeopardize your future and understand that everything you do now will affect your future in some way or another.”

Athletes who fail to qualify at nationals will have a final chance at the CARIFTA trials March 16-17. The Flow CARIFTA Games will be held over the Easter holiday weekend, March 30 to April 2, at the national stadium.